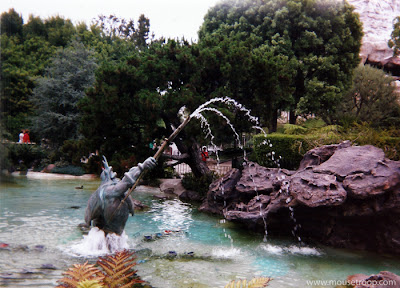 After beginning his theme park career quietly at Disneyland, King Triton has moved on to Disney California Adventure in a big way; he holds the record for getting his face on more DCA attractions than any other character. Somehow, he's managed to take over Paradise Pier!

As seen in the above photo, Triton once reigned over his own jumping fountain garden, making sure the humans visiting his daughter's meet n' greet behaved themselves. 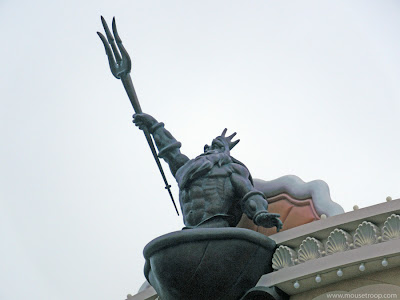 When the grotto was bulldozed to make room for Pixie Hollow, the impressive Triton statue found a new home across the way as the crowning exterior centerpiece of The Little Mermaid: Ariel's Undersea Adventure.

Of course, Triton already had a presence in DCA'a seaside amusement park. He's got his very own sea-creature carousel. 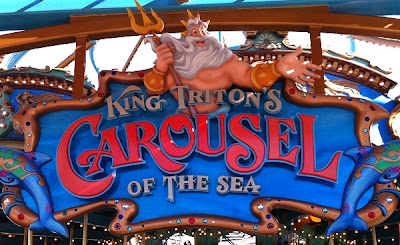 And he guards his daughter's restaurant. 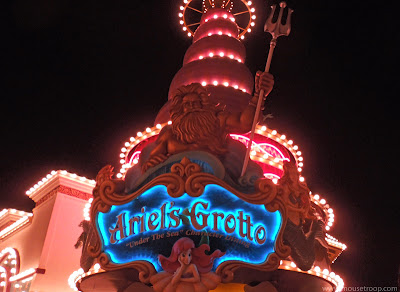 Okay, this one looks a bit freaky and began as an unnamed guardian for Wolfgang Puck's Avalon Cove restaurant.  Now that Ariel's moved in, however, we can only assume it's now supposed to be Triton...or the uncle we never hear about...

And, of course, King Triton also appears in the finale of The Little Mermaid ride.

At any rate, Paradise Pier is certainly well-protected. At this point, maybe Triton Pier would be a better name for the  place! In fact, he could burst out of the waters of Paradise Bay to host World of Color! The place needs a fun backstory...maybe Ariel's dad should simply take over.
Posted by Rich T. at 1:30 AM