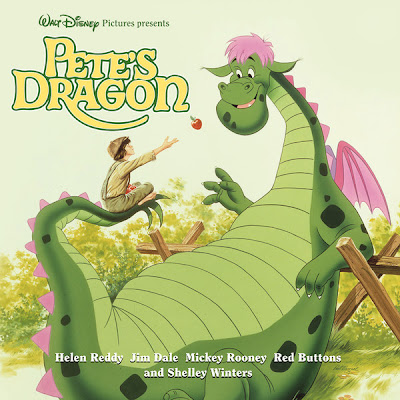 After a long, long stay in the vault, the 1977 Pete's Dragon LP recently arrived on iTunes and Amazon MP3. Fans can rejoice, and then puzzle over the deletion of one of the album's tracks.

Pete's Dragon is no Marry Poppins, but the songs are still a lot of fun, and if you've never heard this album before, you might be surprised to find that several of the tracks differ quite a bit from the movie versions, particularly Mickey Rooney's "I Saw a Dragon." The songs are also in the wrong order (the album's always been like that), so you'll probably want to fix that on your playlist.

The biggest change involves the missing song: the faster-paced radio/single version of Helen Reddy's "Candle on the Water". Originally, the album put the single right after the overture, then closed the LP with the slower version that appears in the film. On this re-release, the movie version moves up to the post-titles slot, and an abridged reprise of that same track brings the album to a close.

Despite the change and the out-of-order songs, this a bright, fun album. It's also a fairly brief experience, running only 37 minutes. For anyone who missed its limited run on CD several years ago, this iTunes release might mark the first time you've heard these versions of the songs in ages. I imagine most of the film's fans have never heard these particular recordings at all.

Dragon fans should not hesitate to give this a download -- just be aware of the LP's quirks.
Posted by Rich T. at 1:11 AM