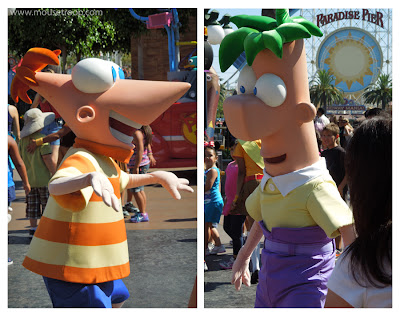 Christmas draws near, but in the world of Phineas & Ferb, every day is summer -- even though they've added a bit of Holiday music to their Rockin' Rollin' Dance Party. Here we see them dancing away their cares (backed by a chorus of helpful Fireside Girls) at the edge of Paradise Pier. 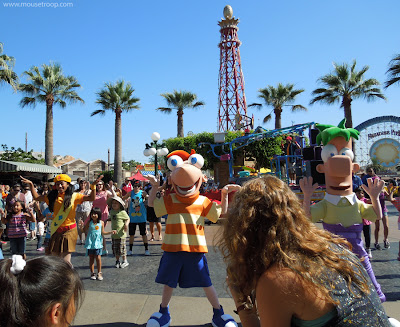 Phineas (in the striped shirt) looks almost frog-like from the front, which is why he's rarely seen from that angle in the TV show. All things considered, however, the characters translate to walk-around costumes surprisingly well.

It's still startling to see these two at first. Aren't they a bit tall to be ten-year-olds? Yes. Yes they are. The performers do such a great job of bringing the stepbrothers to life, however, that children buy into the fantasy instantly, and it only takes slightly longer for the adults in the crowd to get caught up in the fun.

The Rockin' Rollin' Dance Party, which has been a hit since the day it launched, must be an exhausting workout for the characters. I imagine they embrace the cooler days of fall and winter as a welcome relief after dancing through the show several times a day during the blazing heat of summer.
Posted by Rich T. at 12:12 AM