If you've never been to Disneyland Resort; here's a very simple map to give you an idea of the place's layout. As you can see, the resort is very compact and easy to get around. If you're staying on property and don't intend to leave DL Resort during your vacation, you won't need any transportation except to get to and from the airport. 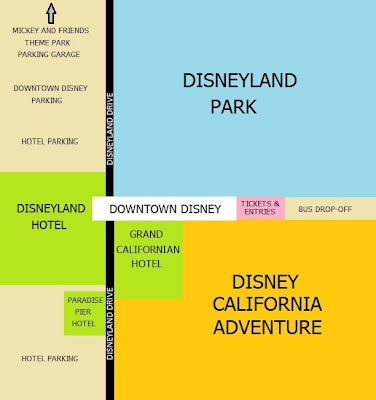 The locales are shown in approximate proper proportion to one another. Note that Disneyland Drive (a public street) passes underneath Downtown Disney, making the outside "real" world mostly invisible to guests of the Disneyland Hotel and Grand Californian. Paradise Pier guests heading for the parks need to walk along Disneyland Drive to the Disneyland Hotel Grounds and Downtown Disney, or cross the street at a nearby traffic signal and take a shortcut through the Grand Californian.