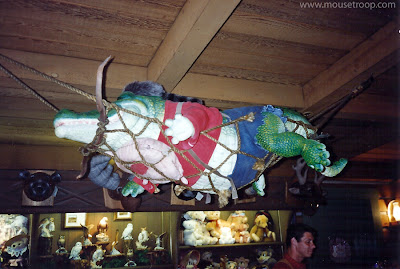 1989 was a frustrating and wonderful year for Disneyland fans. Splash Mountain missed its spring opening date due to technical issues, but finally admitted its first guests in July.

Fans visiting in the first half of the year could only watch with envy as workers took test rides around the mountain. It looked so cool!

Walking past the entry, hearing the distant chorus of "Zip-a-Dee-Doo-Dah" drifting from the hidden-from-sight finale, I could at least tour the rest of Critter Country, the re-themed land formerly known as Bear Country. Stepping into the newly-named shop, Crocodile Mercantile, I got a look at Critter Country's first new inhabitant, the store's namesake.


The enormous croc rested belly-down in an overhead hammock, simultaneously napping and keeping watch over his rustic shop. I asked the nearest Cast Member if the character had a role on the new ride. He nicely replied that he wasn't certain; the croc had just been installed in the shop the night before.

And, yes, I know Crocs are not native to North America, but the character has a croc's narrow snout, so he's not an alligator -- Splash Mountain was never meant to be an accurate nature documentary. Besides, everyone knows gators favor plaid shirts.

Anyway, this glimpse of Splash Mountain's world got me more excited than ever for the ride's opening, but my pathetic hanging-around-the-area-offering-my-services-as-ride-tester predictably resulted in failure. When I finally took my first ride in July (it was worth the wait), I was happy to notice the croc's twin did appear on the attraction, happily fishing beside the flume.

Crocodile Mercantile, along with its owner, disappeared to make room for Pooh merchandise. It'd be so easy to hate that bear, but...dang, his last movie rocked.
Posted by Rich T. at 12:14 AM