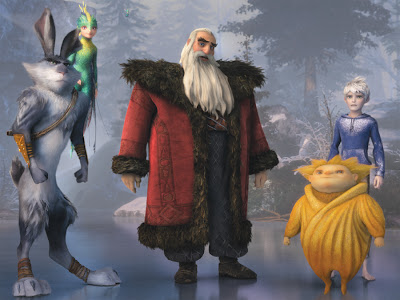 Dreamworks has produced two films that make me wish Disney would buy the company just so their amazing fantasy worlds could take form in the parks. The first was the outstanding How to Train Your Dragon. The second, just released, is Rise of the Guardians.

Directed by Peter Ramsey and based on a series of children's novels by William Joyce, the film offers a daring and playful twist on holiday legends. It also continues a welcome trend started by Dragon: another Dreamworks film mercifully free of pop culture jokes and bathroom humor.

The plot in a nutshell: Pitch Black (the Boogeyman) is tired of being ignored while childhood's assigned guardians North (Santa), Bunnymund (Easter Bunny), Tooth (Tooth Fairy) and Sandy (the Sandman) get all the love and attention. Having discovered how to corrupt Sandman's creations into nightmare creatures, Pitch sets out to destroy the Guardians by sabotaging their hard work. If children stop believing, the Guardians lose all their magic and the ability to interact with the human world. The threat is so severe that the Man in the Moon (never seen, but a respected sage to all the legendary characters) selects -- for the first time in centuries -- a new candidate to join the ranks of the Guardians: Jack Frost. But the freewheeling, responsibility-shirking Frost doesn't want to join. 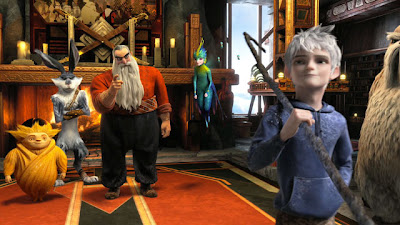 It plays out like a cross between The Avengers and every Rankin/Bass holiday special you ever watched as a child -- and that's exactly why I love this movie. I always enjoy seeing different interpretations of holiday legends, and this one's a lulu.

Disney, of course, has a legacy of creating interesting takes on holiday settings, from the Silly Symphony Santa's Workshop to the Tim Allen Santa Clause trilogy to the terrific Prep & Landing specials. This Dreamworks extravaganza presents an entirely new universe where the Easter Bunny is a six-foot tall boomerang-hurling Australian and the Tooth Fairy commands an army  of hummingbird-like fairies to do her "field work."

The film's highlights, however, lie in every sequence featuring North and the Sandman. In this extraordinary view of the North Pole, Santa's a saber-wielding, tattooed ("Naughty" on one forearm, "Nice" on the other) Russian adventurer who employs yetis as toy builders. Alec Baldwin's terrific vocal performance combines with wonderful animation to bring the character roaring to life with gusto and humor. Sandman, on the other hand, never says a word, yet the animators make him one of the most expressive and endearing characters in the film. The scenes of his dream creations sailing, galloping and clomping across the moonlit landscapes are among the most beautiful images ever put to film.

The story -- for the most part -- unfolds smoothly. Jack Frost, as the the main character, goes through a believable story arc as he finds his purpose in life. Boogeyman Pitch makes a suitable foe as he frustrates the Guardians and tries to sway Jack to the "dark side." He comes across very much like an icy flip-side to Hades from Disney's Hercules.

Pitch is also the focus of one of my few quibbles with the movie. I do wish the film had gone a notch or two further into truly "scary" territory. Pitch earns viewer anger with his cruelty and selfish outlook, but -- while certainly threatening -- neither he nor his Nightmare creatures are very frightening. Cool-looking, but not scary. If the Guardians had to face Pitch in a more horrifying form in the finale, the film might have leveled up from "wonderful family adventure" to "one of the best fantasy films ever" a la How To Train Your Dragon.

A second minor complaint revolves around the "small planet" syndrome that often happens in globe-spanning stories such as this. Although this film involves every child in the world, the Guardians keep returning to the same small group of kids in the same neighborhood. This is all part of the plot involving the One Kid who still believes, but it does make the movie feel less "epic."

My biggest gripe, however, concerns one particular plot device: this film takes the viewpoint that children cannot believe in something without physical evidence. According to this script, it takes toys, eggs and quarters-under-pillows to make kids believe -- and we're talking Every Single Kid on Earth. I have a problem with that. In fact, so does Jack Frost, who at one point accuses the Guardians of "bribing" kids to earn their belief -- an accusation the Guardians never answer. As any real parent or guardian knows, small children do not need material things to believe in something wondrous. To insist otherwise makes for the one cynical dent in this otherwise charming and imaginative film.

Despite that, Rise of the Guardians is an amazing creation, well worth seeing (and spectacular in 3D). The entire cast, which -- along with Baldwin -- includes Chris Pine as Jack, Hugh Jackman as the Easter Bunny, Isla Fisher as Tooth and Jude Law as Pitch all turn in fantastic performances. Alexandre Desplat's excellent score complements the fantasy landscapes perfectly (the soundtrack album is a fun experience in itself).

Between Rise of the Guardians and Wreck it Ralph, Dreamworks and Disney have each contributed a unique and spectacular adventure to 2012's Holiday Season. It's a good time to go to the movies!