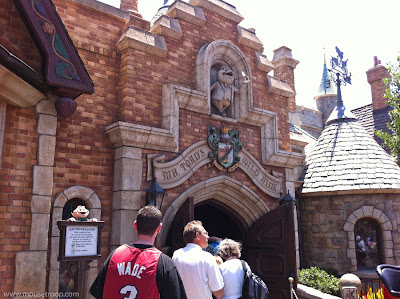 Disneyland's Fantasyland dark rides have received tweaks and improvements from time to time, even after their extensive 1983 remodeling. The first noticeable change after the summer of 1983 was the abandonment of an interesting but problematic special effect on Mr. Toad's Wild Ride. 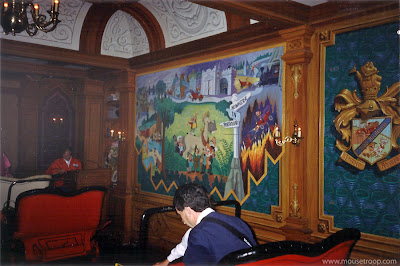 Ever since the opening of New Fantasyland, the last part of the ride's queue has been great fun. Upon entering Toad Hall and encountering the foreshadowing tapestry, you hear jolly music -- and a distinct CRASHING sound which repeats every fifteen seconds or so.

As you near the boarding area, you see the source of the noise as you watch the departing motorcars disappear through library doors -- only to immediately crash back out through the room's fireplace.

The effect (done with scrim, animation and fiber optic embers scattering across the floor) is a hoot to watch -- but it's not quite what the Imagineers tried to achieve in 1983.

Going through my old photos, I remembered I'd taken a shot of the original fireplace effect. 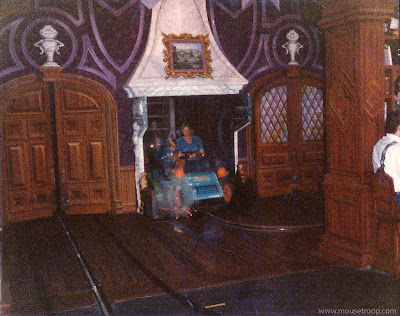 Pre-opening publicity for DL's new Fantasyland mentioned a great new special effect on Toad, which would send riders driving straight through the middle of a roaring fire. The effect would be created with a revolutionary use of projections on a wall of mist. What guests actually witnessed was much like what you see in the photo above -- a faint little misty cloud that the cars drove through. When the fireplace "reassembled" itself, you could see the effect trying to pull itself together, but the next car always arrived before any real image could form. As a side effect,Toad Hall felt very, very humid. No matter; the ride was still a blast.

Peter Pan's Flight simultaneously attempted a similar effect with a climatic mist waterfall for the pirate ships to fly through...but -- again -- all most guests saw was a faint trickle of mist.

As a fan, I hoped the mist machines could be perfected, but both mist effects were soon removed from the rides and replaced with scrim, which allowed the fire and water projections to be seen more clearly.

Today, the bursting fireplace effect looks and sounds better than ever, with a great sizzling sound effect as fiber-optic embers scatter before the little motorcars.

And, of course, the Imagineers never gave up on the mist projections. Today Disneyland guests encounter creepy mist rats in the Indiana Jones Adventure, and both Disneyland and Walt Disney World host the amazing waterfall illusion on Pirates of the Caribbean.

It seems you can't keep a good idea down any more than you can keep a rich, eccentric toad from getting his hands on a motorcar.
Posted by Rich T. at 12:01 AM