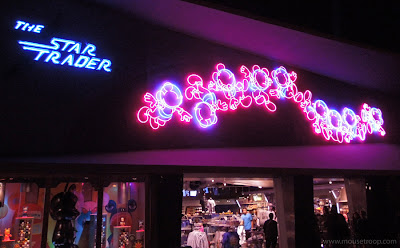 This animated spacewalking neon Mickey has charmed Tomorrowland night shoppers for decades. With an area overhaul on the drawing boards, now may be a good time to take a fond look at current icons, because -- especially in light of Disney's Lucasfilm purchase -- anything in Tomorrowland could change in the near future. And I have to admit, I've got a soft spot in my heart for The Star Trader shop.


Long-time Disneyland fans (myself included) sometimes accidentally refer to it by its old pre-Star Tours era name: The Character Shop. It's always been an odd retail space, housing not just Tomorrowland's largest retail store, but also the Star Tours exit on one side and the Starcade video arcade entry on the other, as well as speedramps to an under-utilized upper arcade.

My family's used the Charac -- I mean, Star Trader as a meeting spot for decades. Especially in the pre-cell phone era, it was the go-to place for regrouping if the whole crew didn't want to ride Star Tours or Space Mountain. I've probably bought more postcards and keychains there than in any other shop on Earth.

The truth is, however, the store was more fun back when the Peoplemover passed through it, and those days are long gone. It's time to move ahead, and a big, unfocused, under-utilized space like Star Trader could probably house something much more appropriate to a renewed Tomorrowland.

I do hope, however, they find another good spot for those neon astro-Mickeys!
Posted by Rich T. at 12:16 AM