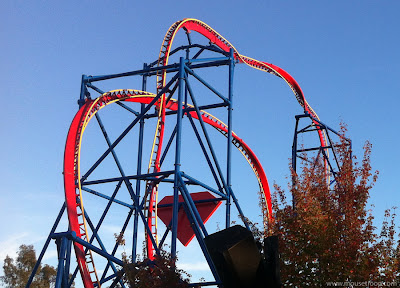 As my group approached the gates of Six Flags Discovery Kingdom, I innocently said, "Let's ride Superman. It looks fun." I would soon regret those words... 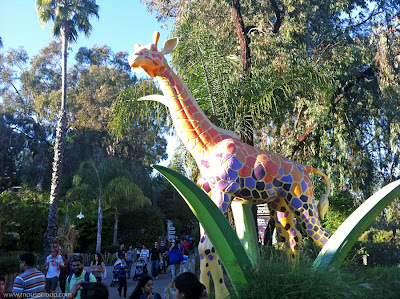 I usually save all my theme park funds for Disneyland, but I was fortunate enough to be invited to an off-season private event at Discovery Kingdom in Northern California with friends and family. I'd never visited DK before, and I'm not a Six Flags fan. I was heading for a day of surprises.

Back to Superman, which I was so eager to subject myself to. This new coaster is, bar none, the freakiest and scariest ride I've ever experienced. This thing launches straight up 150 feet, brakes, then slowly rolls upside down...and the only thing holding you in is a lap bar. Plus, there's nothing to hang onto except a small ring...attached to the lap bar. The vertical dives that follow are nothing compared to that four second roll. Returning to earth, my great nephew was ready for a second trip. Me? Never again.
From there, we moved on through the park, enjoying a day of coasters, amazing animal encounters, lovely pathways, great cast members and good food. Gee, it almost sounds like Disney's Animal Kingdom, right? No, not quite. This is, after all, Six Flags we're dealing with.
From the moment we entered this place, the park's two clashing personalities hit us. There are a lot of genuinely lovely areas and thoughtful theming going on...but the outside world invades in the form of constant, ever-present advertising.

Discovery Kingdom is a beautiful park saddled with a thick layer of Six Flags tackiness, such as...well, how about the M&M stairway?

Or the misting stations with the R-rated Resident Evil movie posters?
It's sort of like watching television and having those awful little ads appearing on the bottom of your screen while you're trying to stay immersed in the story you're watching.

And yet -- like a great movie interrupted by ads -- the core experience still works. I wish Six Flags would dump the product hawking, but, as is, Discovery Kingdom is a wonderful park in spite of it all. 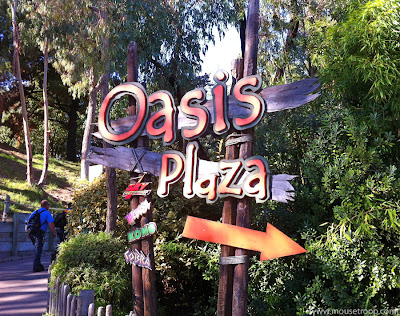 I loved the park's well-crafted, colorful signage set against the green, woodsy landscaping. Everything's clearly marked, and we never had trouble finding what we were looking for. 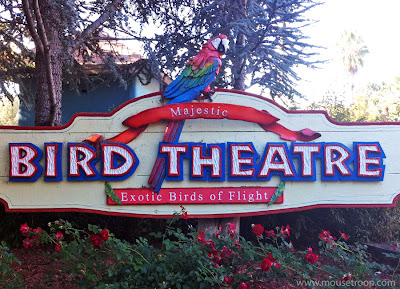 Discovery Kingdom isn't particularly large, but it offers an amazing amount of attractions and activities along its winding paths. 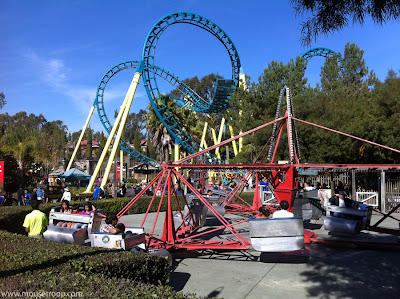 It's got a perfect mix of coasters and "flat rides." In that respect, it puts the much larger Magic Mountain to shame. 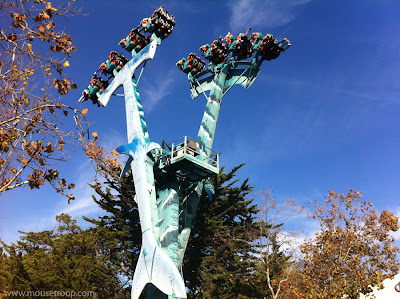 And then, of course, there are the animals. Discovery Kingdom was once a purely animal-focused park known as Marine World Africa U.S.A. The many life-sized tiled sculptures in the park lend a sense of cohesion to the place, as well as preparing you for your encounters. And Discovery Kingdom's elephants are a wonder to behold. 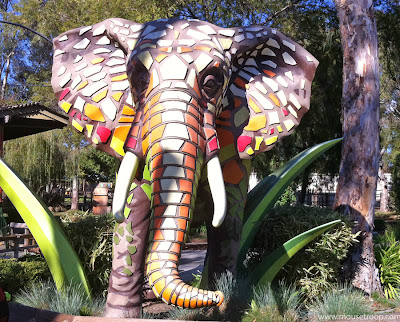 We weren't able to get a seat for the arena presentation, but we didn't mind. The unscripted antics we saw outside were amazing enough... 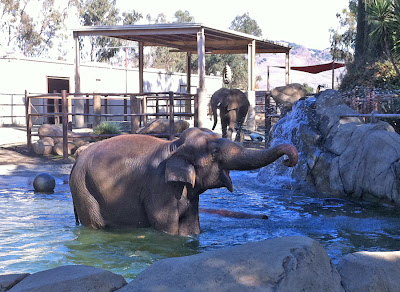 In all my life, I've never seen elephants in a park or zoo setting displaying so much energy, personality and playfulness as this gang at Discovery Kingdom. I'm hesitant to read too much human emotion into these wonderful creatures, but...dang, they looked happy. We watched them play, frolic and splash around for a half hour or so. 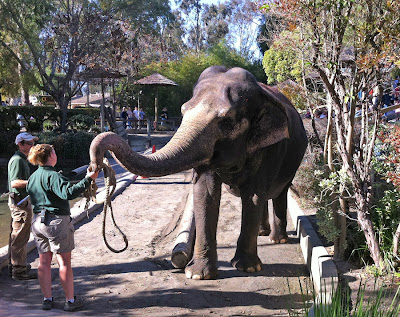 We also watched two handlers gently supervise an elephant through an exercise activity. There's a wonderfully casual, informal yet respectful atmosphere to the elephant grounds. The park's heritage as an educational and research-centered facility comes fully into focus here. 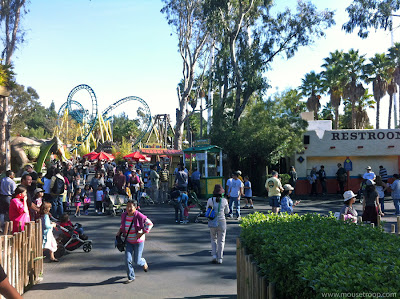 Continuing through the park, I was often struck by how genuinely pleasant the place is. There were only ten thousand people attending this private event, however -- I'm not sure how I'd feel on a summer weekend with twice that many guests crowding the pathways. 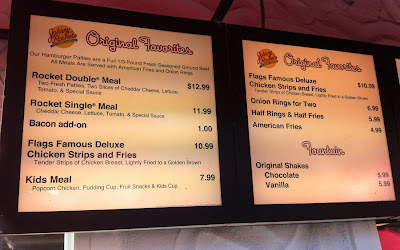 The meal prices at Johnny Rockets seem to be right about in line with Disney.

The park closed at five, so we ended our day in the park's aquatic section, enjoying the Walrus Experience (naturally), and the wonderful Shark encounter, in which you ride a moving sidewalk through an underwater tube as sharks swim around and above you. 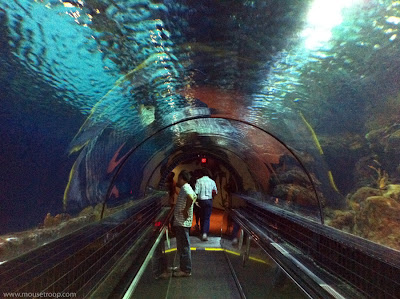 It's spectacular and unforgettable, ending in a small but well-designed shark museum and education center.

On the way to the park exit, we encountered Daffy. Perfect costume. Although the classic Looney Tunes of the 40's and 50's are the funniest short films in the history of humankind, I've never had a strong desire to purchase the character merchandise. Unlike at Disneyland, I found it extremely easy to leave the park without buying anything. 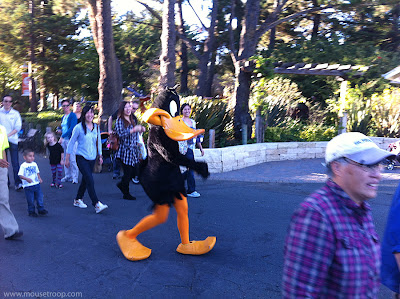 Looking back on the day, I'm amazed how well Discovery Kingdom works as a park. Not a great theme park, but just a wonderful, beautiful park full of varied and satisfying experiences. In the six hours we were there, I was terrified, delighted, enlightened, surprised and inspired. The place delivered; it lives up to its name.

The employees were exceptional, too. Everyone we encountered -- security guards, ride operators, animal experts and food servers -- made us feel welcome.

If Discovery Kingdom works so well while blighted by M&M stairs and Credit Card banners, I can only imagine how wonderful it could be if freed from that ugliness. If Six Flags would just consider toning down the ads, this park could become truly spectacular. 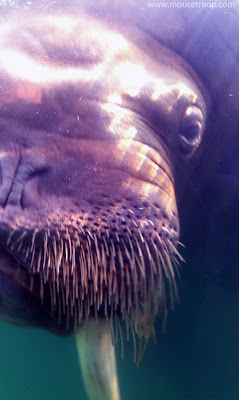