Disney's Favorite Way to Bump Off a Villain 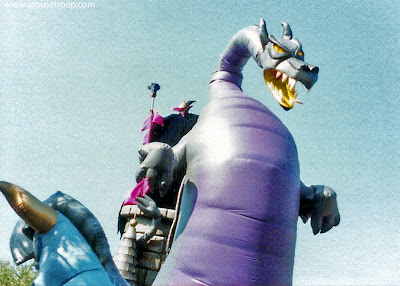 Not all Disney villains die, of course. Some are imprisoned and some (mainly in the comedies) are merely humiliated. Then there's Pinocchio, a very dark film in which five major villains get off with no punishment at all -- because the message of Pinocchio is watch out!

When Disney storytellers do kill off a creep, however, they've definitely got one preferred method. Let's take a look at the list of all the Disney animated villain death scenes:


Warning: Spoilers for everything through Brave. To qualify, each villain must have been a Disney or Pixar animated character (or at least animated in their big death scene).

That's quite a legacy of imaginative and strange fictional deaths, but we certainly have a clear winner:

Yes, Disney's favorite way of killing a bad guy is the classic "Death Plummet." We can also see that this trend is a fairly recent development, though it all started back with the very first animated feature.

The DP is a great way to provide a happy ending without having the hero or heroine actually have to perform the act. In fact the only Disney heroes who have actually intentionally killed their foes are Tramp, Prince Phillip, Eddie Valiant, Prince Eric, Jack Skellington and Queen Elinor.

I don't know about you, but it seems to me that Scar got the most grisly villain demise: eaten alive by his own henchmen. Now, that's what I call a rotten day.


Notes: This is an update of an article that appeared in 2010 on our previous blog, Astonished Walrus. The photo at the top was taken at Disneyland's 1983 parade, "Flights of Fantasy." We'll have more about that parade in an upcoming post.
Posted by Rich T. at 12:21 AM