The Weirdest Thing In DCA 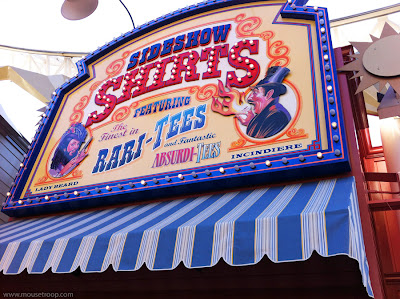 At Disney California Adventure, guests encounter many offbeat sights, from a Cadillac Mountain Range to the factory restroom of Monsters, Inc. Inside a Paradise Pier shop called Sideshow Shirts, however, they'll come face to face with the park's strangest inhabitant... 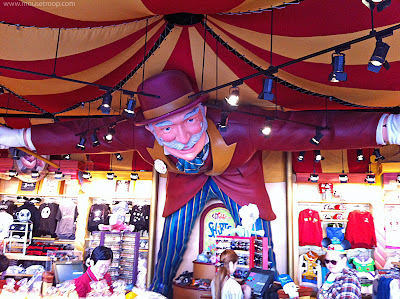 It's this guy. If you've never shopped for souvenirs under the gaze of a gigantic, stooped-over sideshow barker holding up the ceiling...well, here's your chance! 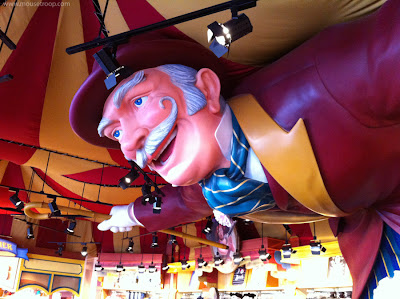 It really is an amazing statue, full of personality. It reminds me of the old Fun House at San Francisco's Playland at the Beach (long gone), which featured a large central room under the watch of giant clown faces hanging from the ceiling. 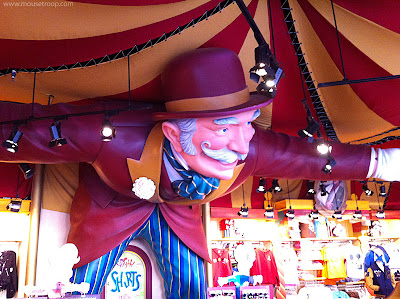 Paradise Pier once hosted a giant hamburger, a giant orange, a giant test-of-strength game and giant sunglasses on a dinosaur. Our friend the giant Sideshow Barker has managed to--so far--escape the wrecking ball fate of his oversized buddies. In that light, the poor guy almost looks like he's hiding, hoping he's not the next to go. I'll keep my fingers crossed for him; He may be strange, but he certainly is unique, fun and startling in a classic boardwalk kind of way.
Posted by Rich T. at 12:01 AM