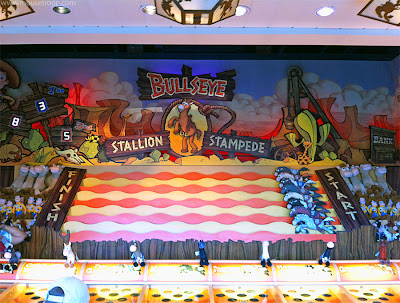 Bullseye is one of my very favorite Pixar characters, so I was happy to see him awarded an appropriate DCA mini-attraction of his own in 2009.

Soon after Toy Story Midway Mania opened on Paradise Pier in 2008, the area's midway games underwent a major theme change to add some desperately-needed character elements. The Bullseye Stallion Stampede is one of those games where a prize is awarded each time, and your odds of winning depend on how many other players take part. Rolling a ball into holes on the playing field sends your little 2-D horse advancing across the race track.

The best scenario for this game is for one or two parents to compete alongside their child with no other players present, guaranteeing a plush prize for a reasonable cost. Although "real" world carny games are notoriously stacked against the player, this family-friendly twist can actually be a good entertainment/souvenir deal when all participants are in the same touring group.
Posted by Rich T. at 12:12 PM