From Paradise Pier Hotel to the Park Gates

Yesterday, we covered the pros and cons of staying at the Paradise Pier Hotel. Today, we've got a photo-tour of one important factor most first-time guests ask about: Just how long is the trek from Paradise Pier Hotel to the Parks? Your best bet is to take the shortcut through the Grand Californian. The journey goes like this: 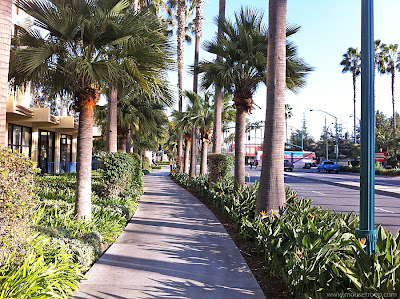 As you exit the Paradise Pier Hotel and turn left, this is what you'll see. That's Disneyland Drive, a public street, on the right. We proceed along the sidewalk to the corner...

...to the Happiest Crosswalk Button on Earth! Yes, it's pretty dull, but think of it as the Doorbell to Enchantment. 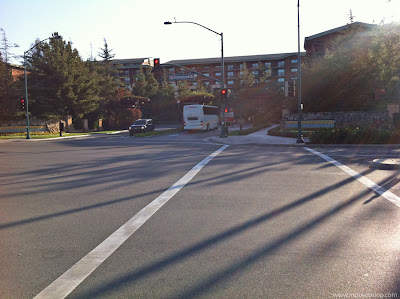 The Grand Californian awaits on the other side. Even though you're on vacation, keep alert when you cross: you don't want your vacation ruined by some crazy driver. Often, you'll find yourself crossing alongside uniformed cast members on their way to or from their shifts. Yes, it is sort of cool and awkward at the same time. 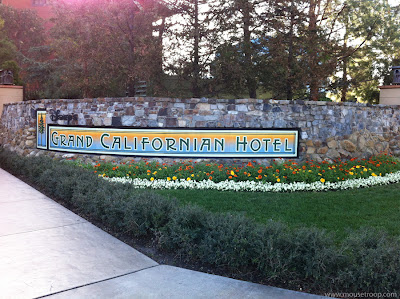 Onto the GCH Grounds. This place is way too pricey for my budget, but it sure makes for a pretty shortcut. 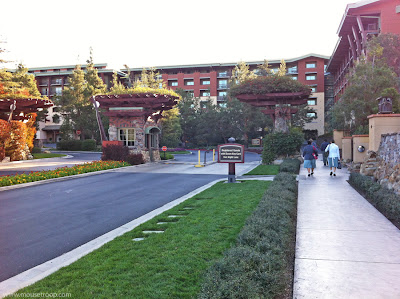 I love the giant planters atop the guard booths. 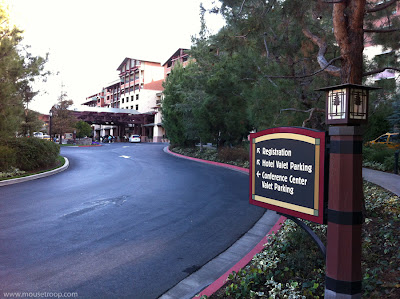 The Grand Californian is massive. 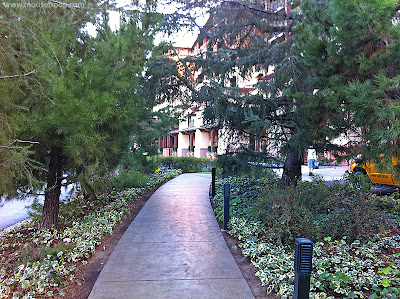 The pathway is well lit at night. 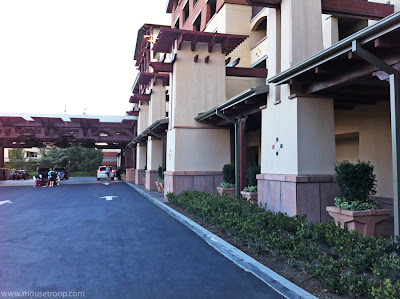 Almost to the GCH entrance. 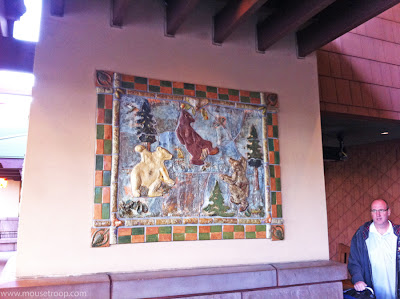 Turn right at the bears... 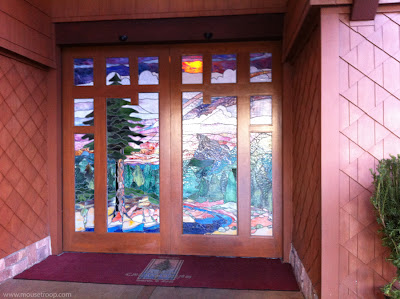 And enter through the coolest automatic sliding doors on the planet. 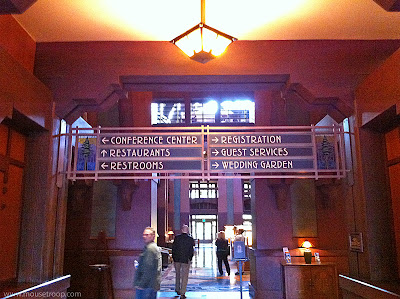 Inside the Grand Californian, head past this sign, then turn left down the main corridor. 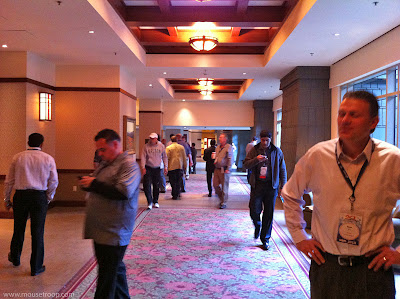 Don't be surprised to find some convention or training gatherings in progress.

SAFETY TIP: Do not look at your phone during the trek down this corridor. In fact, try to keep your eyes focused ahead and downward. Why? 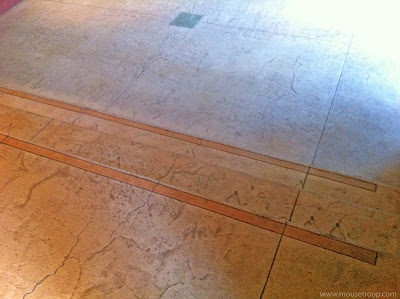 Because of these stupid stairs in the corridor that blend right into the floor until you're right on top of them. Talk about an accident waiting to happen. 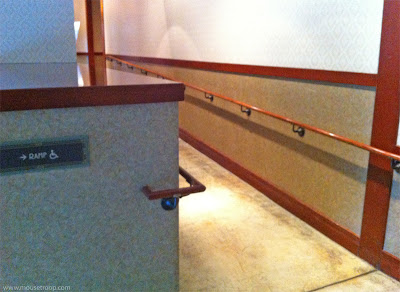 There's a wheelchair ramp to the side. Why they didn't just use a ramp for the entire width of the hall is a mystery. 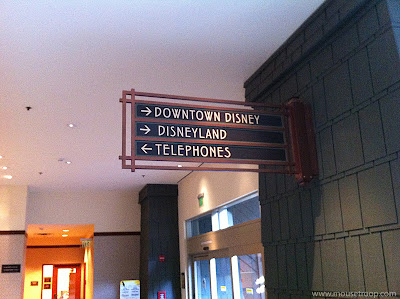 Following the signs, we head out through the doors on the right.

NOTE: The corridor to the Grand Californian's direct gate into DCA  is a bit farther back toward the lobby. Personally, we never use it for early entry: It doesn't get you to Cars Land ahead of the front gate crowd, and it's a rather closed-in place to wait for admission, with nothing to look at. The outdoor Esplanade between Disneyland and DCA provides a much more fun atmosphere for starting the day. 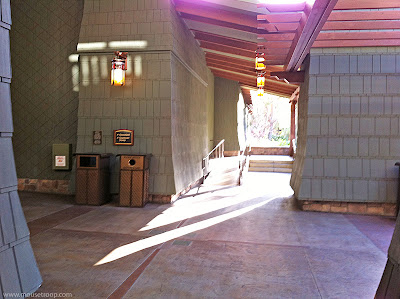 Turn left here. All this zigging and zagging is about to pay off... 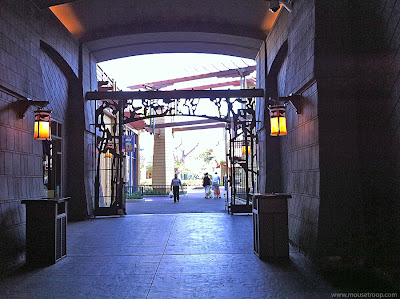 There's a light at the end of the tunnel... 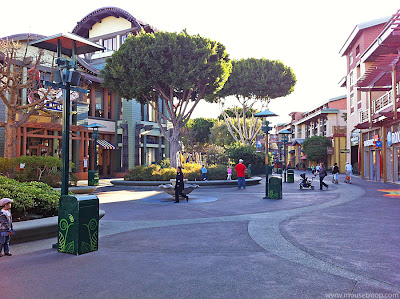 And here we are, right in the midst of Downtown Disney. Head to the right. 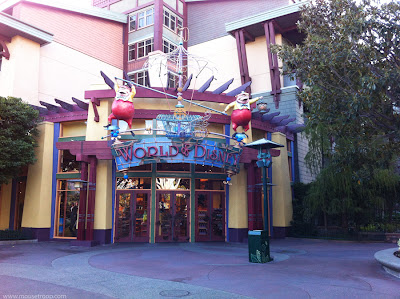 When you see the World of Disney Store, you know you're getting close. 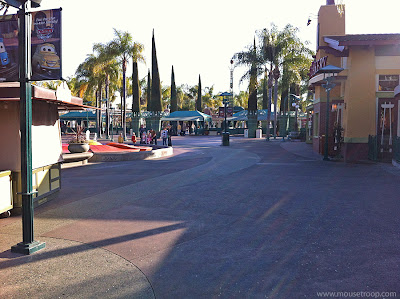 Security Bag Check in sight! Once through security... 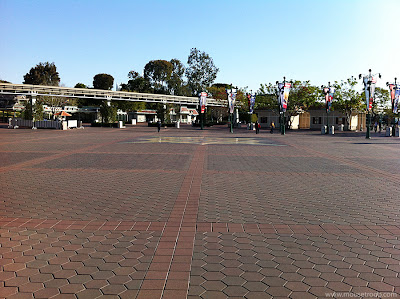 We've arrived at the Esplanade between Disneyland and DCA, which will remain this uncrowded for approximately twenty more seconds. 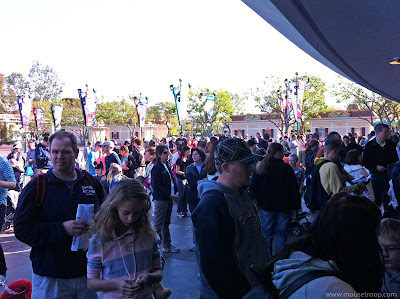 E
Extra Magic Hour was at DCA on this day, so this line is where our trek ends. 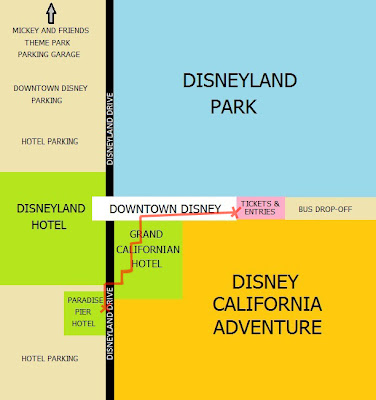 The red line shows our approximate path from the hotel to the Esplanade.

I hope this little photo journey might assist potential Paradise Pier Hotel guests in deciding whether or not the distance is a problem. Personally, I've come to love the early morning walk to the parks. The slog back along the same path at night with aching feet, however...not so much. Still, I do highly recommend Paradise Pier Hotel as a great compromise between perks and price.