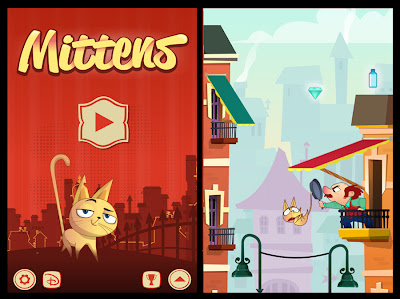 Yesterday, Disney released Mittens for iPhone and Android, and I think they've got a monster hit on their hands. This game is fantastic. It's also hilarious, beautifully animated...and just a little bit twisted. 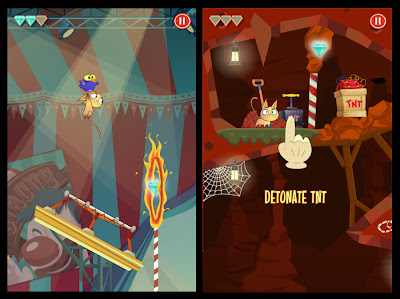 Mittens the Cat (no connection to Mittens from the Disney film Bolt) will go to any lengths to obtain gifts for his girlfriend, and that includes getting shot from cannons, smashed by hammers, crushed by boulders, electrocuted, fried or attacked by ghosts. You don't control Mittens directly; the object is to get him safely to his goal by cutting cords, pushing buttons, inflating monkeys (yes, really) and otherwise manipulating pieces of the environment at the right moment.

Do it right, and Mittens celebrates another victory. Do it wrong, and Mittens gets subjected to cartoon violence worthy of Wile E. Coyote. And, believe me, you will see the latter happen hundreds of times before you reach the end of the story; This game thrives on making trial and error as funny as possible.

Any casual game fan can recognize a lot of elements and play mechanics at work here: a bit of Cut the Rope here, a bit of Angry Birds and Donkey Kong there... But what Disney (and developer MetroGames) have done -- much like Disney does with many theme park experiences -- is take what's been done before and rework, polish and expand it until it comes to life in a form that flies above and beyond its roots. 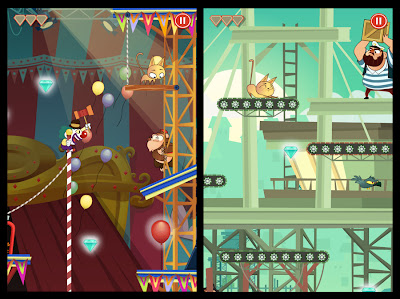 Lost in these screenshots is the incredible quality of this game's animation (by  Sergio Kechu). All of the many characters in this game move and react so believably that it brings the whole little world to life. Added to the multi-plane scrolling backgrounds and wonderful music and sound effects, it all creates a vivid, enthralling little game world that's frequently laugh-out-loud funny.

99 cents buys you three game worlds (about 24 levels in each) which all begin and end with a charming cinematic. I got through the whole game in a couple of hours, but didn't even come close to gathering every gem. The experience was so charming and funny that I felt I'd gotten my money's worth by the end of World 1. There's an extra world available for another 99 cents (The Docks) which isn't part of the main storyline, with more content promised for the near future.

Adopt Mittens and give him a home on you phone! Just as they did with Where's My Water, Disney's proven that when they combine a solid game concept with high production values and great animation, the results can be spectacular and incredibly entertaining for all ages.
Posted by Rich T. at 12:21 AM