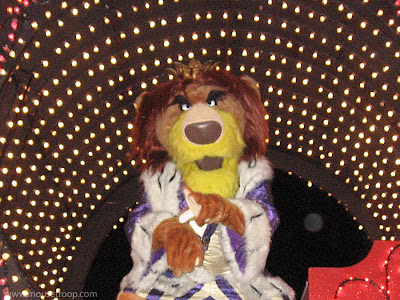 It's everyone's favorite showboating monarch, King Leonidas! He might be a bit of a tyrant--and his soccer sportsmanship's a bit iffy--but he can play that calliope like no one's business (and he knows it!) Working the crowd for more laughs and cheers than any other character in the Electrical Parade, he's the one Bedknobs and Broomsticks character who's remained in the public eye through sheer charisma (or maybe no one's got the nerve to hand him a pink slip.)

This picture was taken in 2008 during the Electrical Parade's DCA run, just before the show headed to Walt Disney World.

In the interest of good taste, I cropped this photo a bit: King Leo had just plopped back down on his calliope bench, and his tail was hanging in a really awkward, family-inappropriate spot. Yeah, that's right--Mouse Troop's protecting the dignity of cartoon royalty!
Posted by Rich T. at 5:24 AM