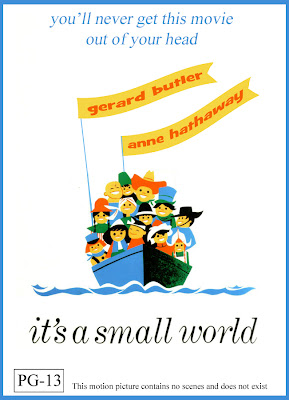 With varying degrees of success or failure, Pirates of the Caribbean, The Haunted Mansion and The Country Bears have all had their turn as motion pictures. There's a Jungle Cruise film brewing, a much-anticipated Mansion reboot in the works, and a Big Thunder TV pilot heading our way.

Is there any ride, show or parade that can't be translated into a movie or TV production?

We think not! Here, for your consideration, Mouse Troop present four pitches for motion pictures based on four park attractions that are crying out for the big screen treatment! Let's start with a sure-fire comedy blockbuster based on a beloved classic that's traveled from Disneyland to Walt Disney World's Magic Kingdom...

In the 1890's, an average American family visits the Chicago World's Fair. After an accidental gift bag swap on the way toward the exit, "Father" brings home what he believes to be a box of "Hoochie Coochie" stereo slides, but it turns out to be an experimental contraption called the Tech-Evolver, which causes the family's household appliances and tools to become more and more advanced with each passing day. At first, the family's delighted at the conveniences bestowed upon them, but--while the household parrot sarcastically squawks, "Progress!"--things soon get out of hand. The appliances become sentient and attempt to enslave the town's citizens. In the end, Rover and Uncle Orville save the day and everyone agrees that--with proper foresight--there's still a Great Big Beautiful Tomorrow.

Tim Allen purchases a run-down restaurant in an undeveloped corner of Hawaii. He's annoyed to find the place infested with parrots and toucans, and is startled when one bird, Jose, comes forward with advice on how to run a business. Against Jose's warnings, the man decides to expand the parking lot by attempting to cut down a tree the bird refers to as Tangaroa, father of all gods and goddesses. Tangaroa naturally takes offense. Suddenly faced with an angry (and eloquent) walking tree/god, Tim Allen flees Tangaroa's wrath and locks himself in the restaurant to hide among the birds, flowers and tikis, but Tangaroa has merely gotten started at teaching the man a lesson he'll never forget...

Set in the Star Wars universe and filmed alongside the new trilogy, this film follows the day-to-day trials, mishaps, pranks and romances of everyday blue collar workers (life forms and droids) as they put in their hours working for Star Tours, the Galaxy's most poorly-run travel company. Filmed on a low budget, it resembles a sci-fi version of the movie Clerks and gives us a view of that far-away-long-ago galaxy as it's experienced by 99.9999 percent of its inhabitants -- the everyday galactic citizens.


IT'S A SMALL WORLD

Curmudgeon Ex-Cop-Turned-Celebrity-Bodyguard Gerard Butler agrees to protect an international choir of orphaned children as they make a goodwill pilgrimage around the globe. Unfortunately for Butler, the kids only sing one song...and they sing it everywhere, even while battling smugglers. In one form or another--whether sung or instrumentally--the title tune is heard for the entire running length of the film.

Okay, I'll stop now. All in all, it's probably a good thing I'm not in charge of Walt Disney Pictures. What attraction do you think would make a wonderful (or wonderfully awful) feature film?

Confession time: The Star Tours pitch is one I'd actually like to see come true.
Posted by Rich T. at 12:01 AM