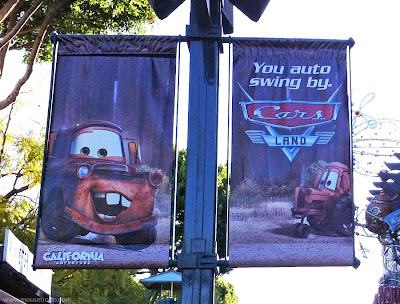 Park advertising slogans play a huge part in launching a new ride or event. Some of Disneyland's event-related catch phrases have been more memorable than others, but they're usually quite fun.

As a child, I first noticed the park ads during my family's annual road trip to Anaheim in 1969. I looked out the car window and saw, standing alongside Highway 101, a painting of a large, ominous-looking house accompanied by the words, "The Haunted Mansion is Waiting For You." We were still about three hours from the park, but I'd already started imagining what kind of ghosts we'd encounter.

Here's a quick list of my favorite Disneyland advertising "tag lines" that have appeared on billboards, newspaper ads and television commercials. How many of these catchy little phrases--some very recent, some from years ago--do you remember? Can you identify the event they accompanied? Answers after the next picture.

1) Get Ready to be Floored!

3) What's Gotten Into the Matterhorn?

6) Wish Upon a Brighter Star.

8) The Happiest Place on Earth Just Got Happier!

And here's a tough one, as it was directed at the Southern California locals in a huge full-page ad in the L.A. Times back in the 1980's:

1) Cars Land
2) Splash Mountain
3) The Abominable Snowman added to the Matterhorn (along with other enhancements)
4) The return of the Subs as the Finding Nemo Submarine Voyage
5) Tower of Terror
6) 1983's New Fantasyland
7) The (supposedly) last season of the Main Street Electrical Parade
8) DCA Reborn as a Worthy Sister Park to Disneyland
9) The local ad for the grand opening of Splash Mountain, which had been delayed several months due to technical problems with the first fleet of log boats.
Posted by Rich T. at 8:56 AM