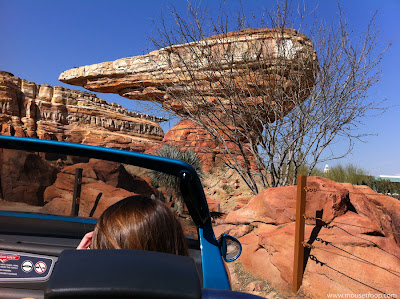 Willy's Butte, one of the most recognizable rock formations in the Cars Universe, marks two important story moments both in the film and on Radiator Springs Racers.

In the movie, it's the site of two character life-changing scenes for rookie Lightning McQueen and veteran racer Doc Hudson.

On the ride, it visually bookends the first and last acts of the adventure, first appearing to riders as a remote landmark silhouetted against the sky, then later looming over the race's climactic banked turn. Between those two moments, guests have changed from curious sightseers to honorary citizens of Radiator Springs--and from relaxed spectators to whooping, adrenaline-pumped competitors. 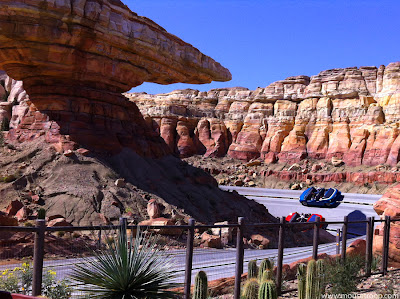 There are many, many reasons the ride succeeds so well, and this awesome rock plays a silent but important role as the journey's lighthouse and cornerstone.
Posted by Rich T. at 1:19 AM