The Cursed Treasure and the Lost Story Point 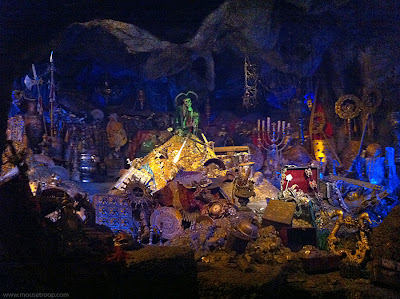 "No fear have ye of evil curses, says you. Properly warned ye be, says I. Who knows when that evil curse will strike the greedy beholders of this bewitched treasure!"

It's hard to believe, but there's a whole new generation of Disneyland fans who have never heard those classic lines on Pirates of the Caribbean!

Consider this messed-up scenario: Ride inspires movie. Movie focuses on the ride's cursed treasure plot point. Ride is altered to incorporate the movie, but the plot point that inspired the movie in the first place is completely removed from the ride!


The original plot of Disneyland's Pirates of the Caribbean went like this: Your bayou cruise went horribly wrong as you tumbled down a pair of waterfalls into a maze of haunted caverns full of long-dead pirates. You discovered a cursed treasure. The curse sent you back in time to try to escape from a coastal town being attacked by the very pirates whose skeletal remains you so recently encountered. As the town burned down and the drunken crew merrily shot each other, you escaped back to the present by climbing up a waterfall.

Ever since the movie-inspired update, the ride is much the same until you reach the treasure cavern. There is no longer any mention that the treasure is cursed. Davy Jones, in the waterfall illusion, growls about a vague "pirates' curse", but no connection to the treasure is mentioned. The ride then jumps to a new plot as Jack Sparrow and Captain Barbossa race to find the town's hidden gold. It's fun, but totally disconnected from the first half of the adventure.

Pirates of the Caribbean, of course, is still one of the best rides on Earth, but I'd like to see the adventure regain its lost storyline and classic Paul Frees dialogue. A possible solution: Create a new ghostly pirate character to speak the original "cursed treasure" lines from the misty waterfall effect. In the ship/fort battle, let Blackbeard (the original, not the recent movie version) have his ship back -- Barbossa's dialogue isn't as much fun (and the idea that the fort is somehow harboring and protecting Jack Sparrow is just ridiculous). The Jack Sparrow figures can stay: they make the movie fans happy and don't hurt the classic experience at all.

I'm not against occasional changes and upgrades for Pirates of the Caribbean--In fact, I love the mist waterfall effect. It would be nice, however, to see the first and second halves of the ride story reconnected with the return of some classic dialogue.

"Ye've seen the cursed treasure. Ye know where it be hid. Now proceed at your own risk..."