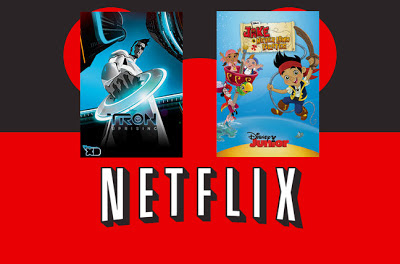 I wish I had more exciting Netflix news for animation fans this month, but the streaming service has added no classic Disney films in the last several weeks. For younger viewers, however, four popular Disney pre-school shows and an action series for older children are arriving this month.

The two most recent shows on that short list are the fist to arrive--In fact, they're available now. Jake and the Never Land Pirates, the At-Least-It's-Not-As-Bad-As-Little-Einsteins preschool show and Tron Uprising, an action series for older children, are ready for viewing.

Later this month, the service will add the cheerful Handy Manny, the Someone-Please-Tell-Disney-That-Adult-James-Bond-References-Do-Not-Make-Appropriate-Preschool-Show-Episode-Titles awfulness of Special Agent Oso and the classic claymation Jo Jo's Circus.

Again, I wish I had more exciting news to report for older Disney fans, but I'm willing to cut Netflix some slack, for their current Disney selection has a decent number of great classics.

I wonder, though: Does anyone at Netflix realize how many subscribers they'd instantly gain if they added shows like Ducktales and Talespin to the roster?
Posted by Rich T. at 12:01 AM