Lighting the Path for Alice 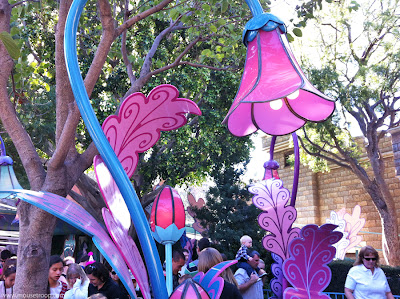 Fantastic flower lampposts tower above the queue for the Alice in Wonderland dark ride. Originally, the entire exterior was given over to the giant leaves and flowers inspired by the film. The real trees and hedges were worked into the scene as part of the 1984 remodeling.

Ordinarily, the clash of scale between the living trees and the giant make-believe flowers could be jarring, but it works well here. The ride's exterior becomes a transition between the outside park and the loud, colorful scenes waiting inside the show building. Wonderland is a dream world, so it makes sense for the exterior to represent a state of mind halfway between awake and asleep...or am I reading too much into it?

After all, the Alice ride's design--like so much of Disneyland-- is the result of Imagineers making the best possible use of limited and awkward spaces. It's a two-story indoor-outdoor adventure because part of it has to squeeze above Mr. Toad's Wild Ride. When talented people are tasked with that kind of design puzzle, we wind up with wonderful landscapes that might never have been dreamed up otherwise.