Review: Mickey and the Magical Map is a Winner 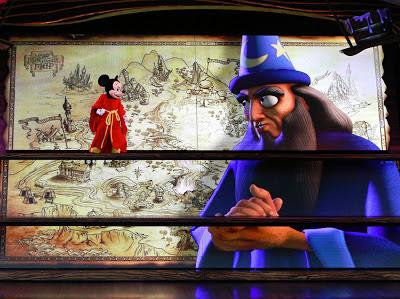 Fast-paced, wonderfully performed and technically dazzling, Mickey and the Magical Map is one of the most solid and crowd-pleasing live shows Disneyland's ever presented.

It's an unusual production, featuring very few Disney characters on stage and putting more focus on an ensemble choir performing on, around and in front of the show's enormous three-tiered high-def video screen centerpiece. The screen assumes the role of the map, and it is indeed a magical sight to behold as it creates an ever-changing environment of wildly animated sets and outstanding illusions.


In a lightweight "plot" reminiscent of both The Sorcerer's Apprentice and the Epic Mickey video games, Mickey's an apprentice map maker, interacting with two animated characters on the video screens: wizard Yen Sid and an adorable, mischievous "spot" who refuses to be painted. Wonderfully-timed stage magic allows Mickey to seamlessly drop into and rise out of the map, changing from a live performer to a video image so believably that the audience has no problem suspending disbelief.

Musically, the show is energetic and well-performed from beginning to end. I wish the show's creators had chosen a more surprising playlist, but it's all so well done that even the great-but-seriously-overplayed "Under The Sea" comes across as fresh and lively.

The big "Wow" number, beyond question, is the Pocahontas/Mulan/Rapunzel medley. Emotional and cleverly staged, this is the scene that's going to bring the Annual Pass Holders back over and over again.

Disney fans will also love the final scene with Mickey and Yen Sid, where the sorcerer puts a new spin on a very famous Walt Disney quote.

Some reviewers have commented about the not-quite-feature-animation-quality look of Yen Sid. I have mixed feelings. His "plastic-y" appearance closely resembles the style of a park walk-around character, and--in that respect--he does match the look of the onstage Mickey. At any rate, he works fine as is, and any improvements to his animation rendering in the future could make this very good show even better.

SPOILER ALERT!!! If you'd like to see the entire show right now (which just might prompt you to visit the park ASAP), Inside the Magic has posted an outstanding video of the debut performance on YouTube. If you want to see an amazing visual trick and the tribute to Walt, jump to 17:35.

It's great to see Disneyland's Fantasyland Theater back in service as an actual stage show venue with such a solid production. Mickey and the Magical Map is a show that, with occasional minor content updates, could easily run for years.
Posted by Rich T. at 2:16 AM