Classic Disney Channel Memories: The Wind in the Willows

In its early years, The Disney Channel was the classiest thing on cable, and it sported a lineup of amazing shows the entire family could enjoy together. There was Five Mile Creek, the sprawling tale of Australia's first stagecoach line. The much-loved Avonlea continued the Anne of Green Gables saga. And then there was The Wind in the Willows, the most elaborate, literate and wonderfully acted stop-motion animated series ever to grace the tube.
Produced by Cosgrove Hall (of Danger Mouse fame), this funny, gentle and sometimes heartbreaking show followed the lives of Toad, Mole, Rat and Badger after the events of the famous novel (and the Disney film. And Mr. Toad's Wild Ride).

From the beautiful music score by Keith Hopwood (of Herman's Hermits!) and Malcolm Rowe to the scrapbook-page opening and closing, there was a theme of mortality running through this show--a sense of the precious fragility of life one seldom sees in an animated series. Community played a huge role; the characters in this show truly needed each other to survive realistic perils--both from the harshness of nature and the ever-expanding development of the nearby human world.

Check out this fan-made YouTube video of the opening theme song (video by ScreenBlaster13). Judging from some of the YouTube comments, I'm glad to know I'm not the only one who still gets chills along my spine when I hear this piece. 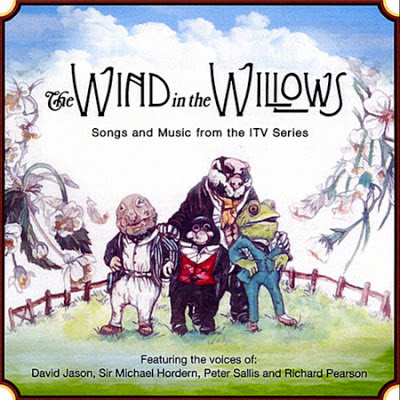 Seasons one and two are available on iTunes, as is the show's soundtrack album.

The show's dry humor and relaxed, laid-back pacing aren't for everybody--and it certainly runs against the stream of today's hyper-paced pop culture. Fans of Kenneth Grahame's novel, however, might find themselves completely enchanted by this detailed depiction of the River Bank world.

The Disney Channel has certainly achieved spectacular success by catering to 'tweens, but I dearly miss its old lineup of great shows that brought history, art and great literary characters to life on a daily basis. Once upon a time, it was my family's sole reason for subscribing to cable.
Posted by Rich T. at 12:48 AM