And Then Mickey Showed Up 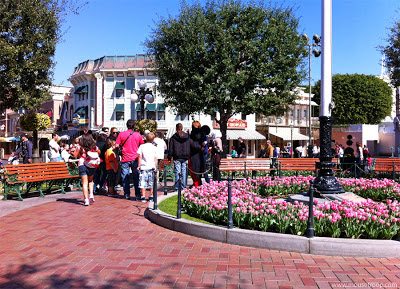 There are moments at Disneyland when the place seems to forget it's one of the planet's most famous and crowded tourist destinations...and it suddenly unveils its heart as Walt's little park of 1955.

I was sitting on a bench in Town Square, waiting for the rest of my group to finish shopping on Main Street. The park was fairly crowded, as usual, but most guests were off in the other lands, and Town Square was nicely calm.

And then Mickey showed up. Unannounced, unscheduled and without a bit of fanfare, he strolled through the square as if he was simply enjoying the park himself. It actually took a moment for folks to notice him, and then a small, happy, polite group of fans gathered around to take turns posing for photos (Mickey's on the group's right, facing away from us).

About five minutes later, he continued on his way, waving at delighted passerby. There were no FastPasses or reservations involved. No ridiculously long lines or added fees. It was simply the kind of pleasant, whimsical moment that makes Disneyland so much more than the sum of its parts.

Spontaneity still happens at Disneyland. The fact that this took place just outside Walt's firehouse apartment made it all the more awesome.
Posted by Rich T. at 12:01 AM