Reviewing a Preview: Oz the Great & Powerful at DCA 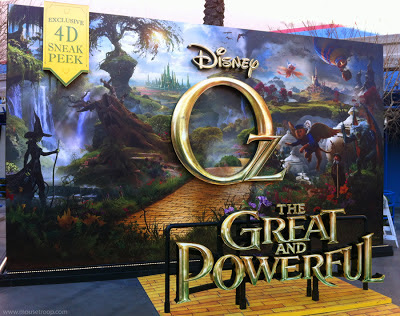 The bad news: It's in the Muppetvision 3-D theater, which means no Muppets during this preview event. This isn't a good swap. In fact, replacing a genuine major park attraction with an advertisement seems like a shoddy way to treat guests. While waiting for this preview, I witnessed several families complaining to the cast members about the missing Muppets and turning away from the "special event" in disappointment.

As for the preview itself...


It uses the teaser trailer and the final trailer to bookend the entire tornado sequence and the future wizard's arrival in the Land of Oz. The tornado sequence is intense and very well done. The arrival in Oz is pretty, but drags a bit. The "4-D" means you get squirted with real water while watching a waterfall scene. This effect is more annoying than entertaining, and -- since the actual full film will not be shown with these in-theater effects at all -- seems completely pointless. At the end, the small audience in the big theater didn't show any reaction at all. Everyone just quietly got up and left. Perhaps they felt as I did: we'd all just spend nine minutes watching a movie trailer when we could have been out in the park doing something much more engaging.

Does it make me want to see the full film? Well, I was looking forward to Oz the Great and Powerful anyway, but this preview did not increase my interest in the movie. If anything, it made me more conscious of one potential problem that I've felt before while watching the regular trailers: a nearly complete lack of humor. On the plus side, James Franco's performance as the title character comes across as believable and sincere. I've got my fingers crossed for the final product, because I would love to see Disney release a fantastic Oz film.

So, I'm hoping all the best for the movie, but -- as far as the preview is concerned -- I believe the ill feelings (regarding the missing park attraction) outweigh any benefit from showing the preview in the first place. I hope Disney comes up with a less-objectionable location for any similar future events.