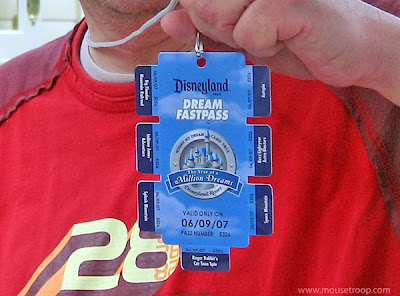 Remember the Year of a Million Dreams promotion at the Disney parks? During the day, elusive Dream Squad cast members would show up at random locations and give out prizes to the next guests to pass their way.

Back in 2007, my family and I got just one prize out of that deal, but it was a good one: Dream Fastpasses for our group.

These were plastic cards with detachable tabs, which served as all-day Fastpasses for each Fastpass-enabled ride at Disneyland: Big Thunder Mt. Railroad, Indiana Jones Adventure, Splash Mountain, Roger Rabbit's Car Toon Spin, Space Mountain, Buzz Lightyear and Autopia. Valid only for the day of issue, the pass could only be used once on each ride, as a cast member would snap off the appropriate tab as you entered.

Not a bad way to save a few hours of waiting time, these great little bonuses remain my family's best memory of The Year of a Million Dreams...which, you may recall, actually lasted 27 months.