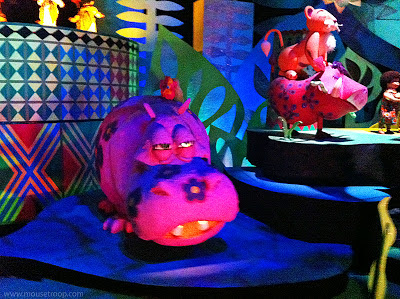 Continuing our look at Small World's awesome stylized menagerie, we have the unforgettable Hippo with its glowing eyes and lazily bobbing head. Since Day One, this creature has provided one of the most fun encounters on the musical trip around the globe.

To the right, you can see two of Small World's semi-controversial recent additions, Simba and Pumbaa (eating a grub). I actually like the addition of the Disney characters; they add another level of fun to the ride (character-spotting) without taking the spotlight away from the original cast...much.

As I mentioned in Part One of this little series, the animals provide most of the fun and humor on It's a Small World. I really think many of the folks who claim to be "creeped out" by all the singing child dolls simply aren't paying enough attention to the ride's charming and hilarious wildlife.
Posted by Rich T. at 12:01 AM