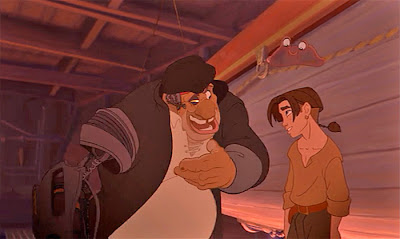 Before I start nit-picking, I'd like to make one thing clear: Treasure Planet, Disney's sci-fi/fantasy retelling of Treasure Island, is a beautiful, entertaining film and well worth watching. It contains some of the best animated "acting" ever to appear on screen, and much of its imagery is unforgettable. It's the only family-friendly film one could reasonably file under "Steam-Punk," and it's got more imagination on display in any given five seconds of footage than most of todays sci-fi films have in their entire running length.

There are, however, good reasons the movie didn't connect with a wider audience in its theatrical run. 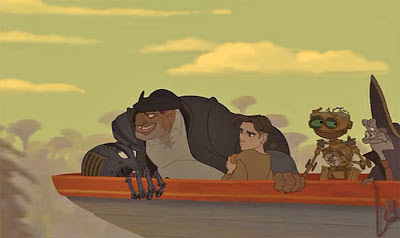 Although I love Treasure Planet, I also find it the most frustrating of all Disney films, simply because it comes so very, very close to being a masterpiece that its flaws are all the more aggravating. As it is, it's a tremendously fun movie that hits its mark most of the time. Of all Disney's later animated features, however, this one suffered the most from being shoehorned into the "Disney formula," which requires an even mix of drama and comedy.

Everything in Treasure Planet that takes the story seriously (Jim, Long John Silver, Jim's Mom, Captain Amelia, Scroop) works wonderfully. Yet the mood is constantly broken by the "comic relief" characters such as Dr. Doppler, B.E.N. the robot and that alien whose sole purpose in the film is to provide fart humor. 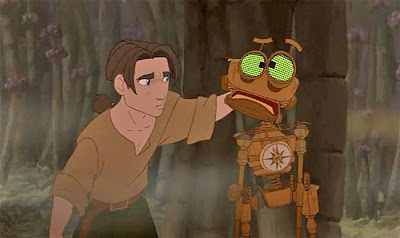 And this is truly sad, because the "serious" characters have all the humor (believable, natural, un-forced humor) the story needs. When you design a character like Dr. Doppler to resemble a dog alien, that's great. When you have him lap up his food like a dog, that's okay. When you say he's from the planet Alpo-nia, you've wrecked the film's world. 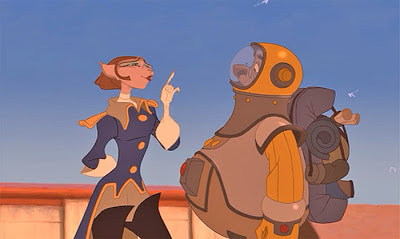 And that world should never have been compromised with Alpo jokes and fart aliens, because Treasure Planet's spectacular universe is a wonder to behold. 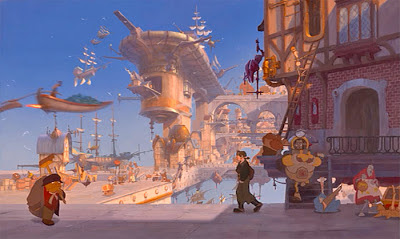 The filmmakers paint a galaxy where space is not a vacuum and magnificent ships sail from planet to planet across a vast, beautiful realm of space whales and glowing comets. A lot of boneheaded critics seemed to be offended by the concept, and smugly declared that the combination of space and tall ships made no sense. Those critics seemed to have their imaginations securely shackled. 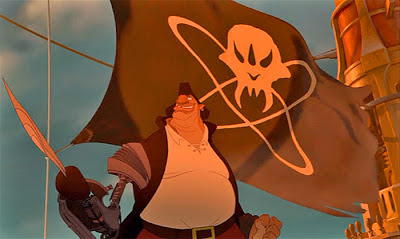 If one wonders why directors John Musker and Ron Clements didn't simply choose to spin the familiar tale in a traditional setting of oceans and islands, the answer is simple: flying sailing ships in a breathable outer space is just too fun a concept to ignore! 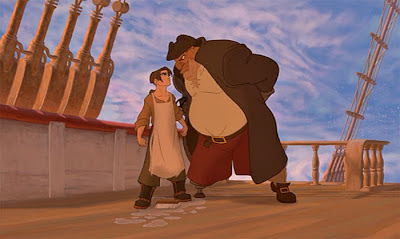 The entire story arc of Jim's mentoring by Silver, Silver's betrayal and their final parting of ways is handled perfectly, and Jim Hawkins makes a believable, likeable hero for the tale. The "Jim's Theme" montage blending flashbacks of his father walking out of his life with his apprenticeship and growing respect for Silver is incredibly well done. 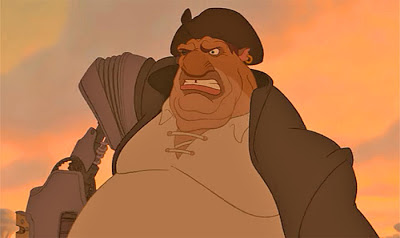 Long John Silver, animated by Glen Keane, is -- beyond question -- the best thing about the movie. In a career full of masterfully animated characters (including Ariel, Beast, Aladdin, Pocahontas and Tarzan), Keane's depiction of John Silver might be his best work ever. 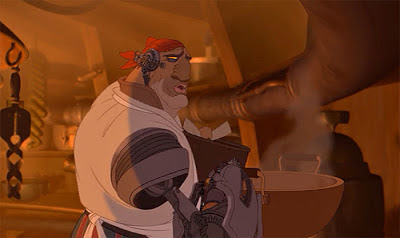 Silver's a very complex character and Keane succeeds 100% in bringing him to life with depth and believability. So convincing is his performance that his alien appearance and mechanical appendages do not distract at all; he is, simply, an amazing embodiment of the literary character.
Technically, he represents a unique achievement in animation, as his computer-animated mechanical limbs and eyepiece are seamlessly intergrated with Keane's drawings of the pirate's flesh-and-blood body.

Even with such great main characters, however, I believe the film suffers from one design decision that keeps the story from connecting with some viewers: too many different kinds of aliens. Now, I realize the directors wanted to portray a vast and diverse galactic population in which humans are just another drop in the bucket. In the big starport scene, this works really well.

But this is a film for humans, and once onboard the ship, the parade of strange beings dilutes the drama, because most of the alien crew are nothing more than walking sight-gags with no personalities at all beyond snarling a lot. They're a cartoonish bunch with no sense of history or place. Imagine if the film had stuck to...say...a half-dozen alien species, each with a more fleshed-out presence. If would have been fun to see more members of Captain Amelia's cat-like race or an example of a non-cyborg from Silver's world. 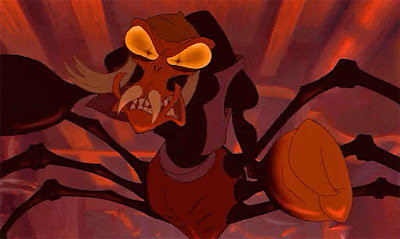 Even the film's effectively scary villain, Scroop, is a shallow, one-note character. He fills his role in the plot nicely, though, and his battle with Jim is genuinely exciting. 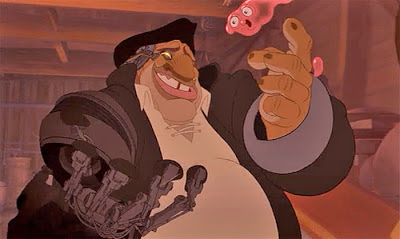 Also tolerable is Silver's pink blob of a pet, Morph. Sure, he's there because you can't have a Disney film without a tiny, cute sidekick...but he works, and he's such a brilliant alien twist on the traditional pirate's parrot that I have to keep him in the "plus" column.

The film builds up to a terrific action/escape sequence and a heartfelt, believable wrap-up to John Silver's role in Jim's life. James Newton Howard's music score, excellent throughout the film, really shines in these moments.

If you've never seen Treasure Planet, I urge you to give it a shot; it deserved a much better fate at the box office. Despite its flaws, it contains some of the best moments to ever emerge from Walt Disney Studios.

And its universe is like nothing you've ever seen before.