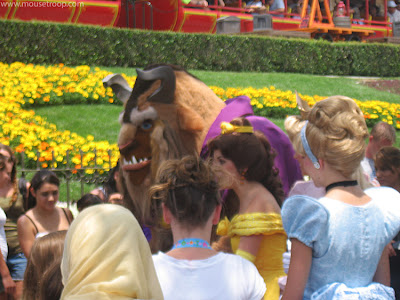 Organized meet n' greets have their place, but I prefer to see the characters out and about in the parks, intermingling, chatting and goofing around with the guests. In this lovely shot I took of a bunch of guest's heads a couple of years ago, Belle had begun an impromtu game of "Beast Says" with a group of children. She was so earnest and delightful that even Cinderella paused to watch the fun.

It would have been awesome if the game had ended with "Beast says, 'GET OUTTA MY CASTLE!!!!'" -- and then have Beast chase everyone around...but that didn't happen.

Next to the Fab Five, Belle and Beast are my favorite park characters. I'm certainly glad they let Beast stay Beast, instead of Mr. Learned-His-Lesson-Prince from the end of the film. If they had went with the human dude, everyone in the parks would be saying, "There's Belle and...some guy..."
Posted by Rich T. at 12:01 AM