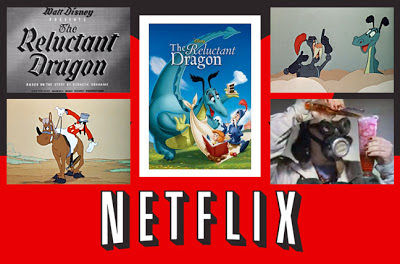 I have to admit I didn't see this one coming: Netflix just added The Reluctant Dragon to its growing Disney lineup. This isn't merely the short film that's appeared on home video; this is the entire, unedited (and extremely unusual) 1941 feature film starring comedian Robert Benchley with appearances by Walt Disney, Ward Kimball, Norm Ferguson, Fred Moore and Clarence Nash as themselves.

A combination of live action and animation, the film is a wild hodgepodge of fact and fantasy as it presents a very Willy Wonka-like tour of various departments of the Walt Disney Studios, climaxing with the debut of the offbeat and very funny title story. Along the road to Walt's screening room, you'll laugh, groan, and say "What the --" a lot. And --a warning here -- you'll wince at a couple of unfortunate culturally insensitive moments. Speaking for myself, there are two specific seconds of film I wouldn't mind seeing removed.

Most of the movie, however, is a fascinating trip back through time to see how Walt Disney publicly presented his studio to the American public in June of 1941. It's not one of Disney's greatest films, but it contains many terrific moments, and the Dragon short is a mini-classic.
Posted by Rich T. at 12:01 AM