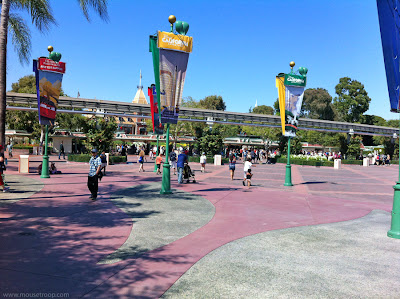 We've got two photos here -- two angles from the same spot, with Disneyland to the left... 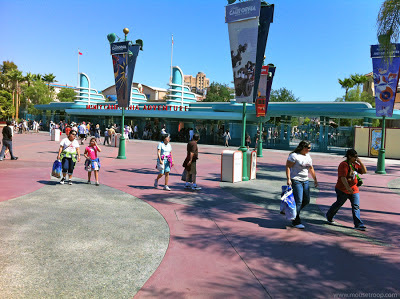 Disneyland Resort regulars have come to know this Esplanade as a wonderful transition zone where Monorails zip past and great Disney instrumental music plays nonstop.

For any park fans who have never been to Disneyland Resort (or at least not since DCA was built), this is a quick visual demonstration that, yes, Disneyland and Disney California Adventure really are that close to each other. It gives park-hopping new meaning; I'm sure someone in better shape than me could literally hop on one foot from one park to the other...or travel by pogo stick.

Now that DCA is finally a fantastic park, this area generates a unique, surreal atmopshere in the morning as guests line up at the opposing turnstyles, glancing over their shoulders and wishing they could somehow enter both parks simultaneously.

During the recent holiday season's busiest days, the lines for the two parks met in the middle.
Posted by Rich T. at 1:21 AM