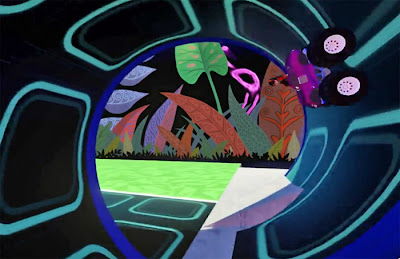 Decked out in monster-truck tires, Holly Shiftwell from Cars 2 carries Violet from The Incredibles through a Tron loop in Wonderland as the Caterpillar's alphabet smoke rings drift upward.

I can't wait for the June release of Disney Infinity (the company's highly-anticipated answer to Activision's mega-hit Skylanders franchise) and its recently-announced first expansion set, Cars. Here's another shot: 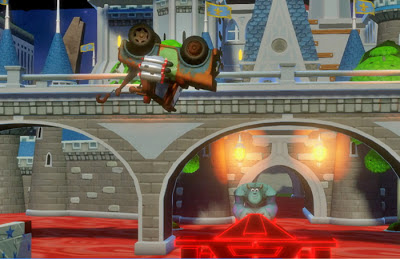 Missile-equipped Mater somersaults in front of Cinderella Castle while Sully pilots a Recognizer. These images from the latest game trailer highlight a few of the potentially "infinite" user-created mash-up scenarios in the game's Toy Box Mode, which will also give players the ability to design their own race courses for use by all Infinity characters. 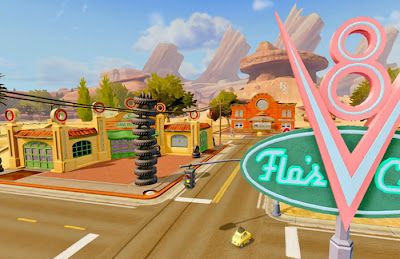 In the expansion's adventure mode, it looks like villainous Chick Hicks (still sponsored by Hostile Takeover Bank) returns to stir up trouble in Radiator Springs. 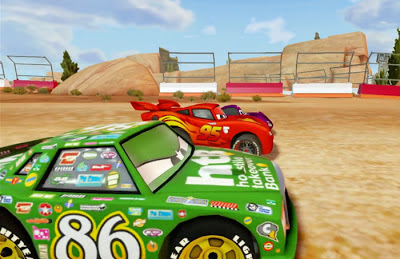 I hope Infinity turns out to be as much fun as it looks. So far, I'm definitely a fan of the game's visual style; many of these images look like book illustrations, and that's a very good thing. In just a few more months, we'll see if the project lives up to the hype. Fingers Crossed!