The Kind of Home that Annoys a Jeep 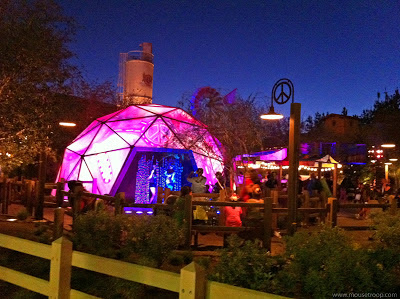 Yesterday we had a shot of Sarge's Surplus Hut, so it's only fair that we give equal time to the domicile of the neighbor Sarge loves to argue with, Fillmore the Hippy Van.

Fillmore's Taste-In is probably the least-visited home in Cars Land, mainly because there's not much to do there except purchase fruit and bottled liquids. Personal appearances by Fillmore and Sarge could turned this into a must-visit property.

Still, it's a kick at night with its swirly psychedelic lighting. Back in the 70's, I owned a little gizmo called the Fantastic Plastic Light Machine (as did nearly every other teen in the U.S.), which would instantly flood one's room with a similar color scheme. Where's my Dark Side of the Moon LP?
Posted by Rich T. at 12:01 AM