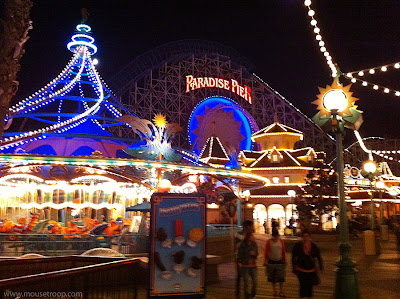 Paradise Pier has come a long way since its dodging-rotten-tomatoes opening. It's actually become a lovely place, especially at night. Image problems, however, continue to dog the land.

It cries out for an easy-to-grasp backstory to lock down its identity. To this day, reporters and well-meaning writers occasionally refer to Paradise Pier as a "carnival." It's not. It's an Amusement Park. There's a big difference in theme, there. 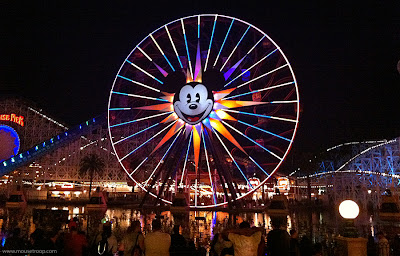 A carnival is a traveling show, staffed by "carnies" who move from town to town as an extended family. The rides are designed to fit on trucks when dismantled, and ticket booths and concessions are operated out of trailers. It's a tough, grueling lifestyle.

An amusement park, on the other hand, is a permanent part of a community, and it's staffed by locals. Often anchored by a large roller coaster, it plays an important role in the town's economy, and its structures are built to last.

It's time for the Imagineers to pull Paradise Pier's identity into focus. Hints are appearing; if you look in the right place, you can see the pier is owned by one Gustav Tinkershmidt. But things need to be brought more to the foreground, with a basic premise that even the most casual park goer can enjoy. If this is a tribute to the Great American Amusement Park, go whole-hog with concept! Who are these characters who own and operate Paradise Pier? Let us meet them. What's the history of Paradise Bay? And what year is it, anyway?

I'd love to see Streetmosphere performers and props brought in to tell this place's story. Right now, Paradise Pier is coasting along on good will, because it's so much better than it used to be. Subtle hints about the Pier's ownership are a nice start, but some bolder, more upfront storytelling and placemaking -- of the sort that's made Storybook Circus in Walt Disney World such a hit -- could bring Paradise Pier roaring fully to life.
Posted by Rich T. at 12:32 AM