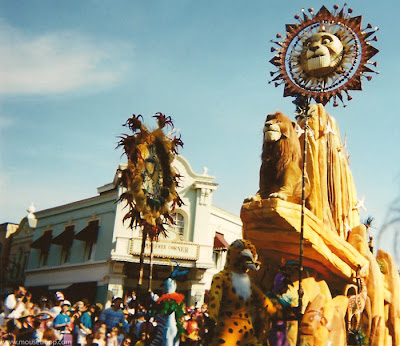 1994 saw the debut of the greatest daytime parade Disneyland has ever presented: The Lion King Celebration. This amazing production combined music, dance, puppetry, audioanimatronics, acrobatics, radio-controlled creatures, live percussion and audience interaction into a joyful fusion of Disney animation and African art that was unlike any previous park attraction.
Employing nearly 100 performers and operators, the production became an instant smash-hit for the park, prompting many return visits and repeat viewings.

The show broke the traditional parade mold by utilizing a "Show-Stop" format: the cast and floats began by parading and dancing along Main St. and Fantasyland to the beat of a bouncy instrumental rendition of "I Just Can't Wait to be King." The human performers were fantastic, but the animals stole the show. 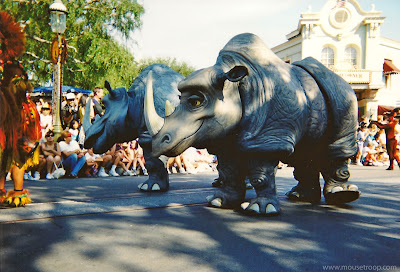 And not just Simba, Nala, Timon, Pumbaa, Zazu and Rafiki -- the real surprise and delight came from the supporting beastiary, starting with the scene-stealing twin rhinos who opened the parade, marching jauntily along and playing to the crowd like no one's business.  These two remain my all-time favorite walk-around Disney creations. 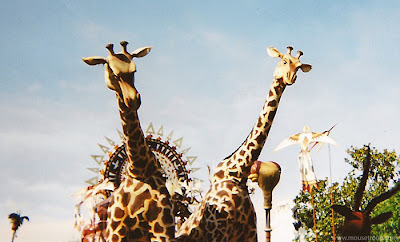 Other animals included the giraffes (who could lean their heads out over the spectactors), ostriches, remote-controlled crocodiles who would playfully rush at the crowd, a huge "baby" elephant and its enormous parent (who sprayed water into the crowd from its trunk) and large remote-controlled beetles and scorpions evading Timon and coaxing shrieks from the folks sitting on the curbs. 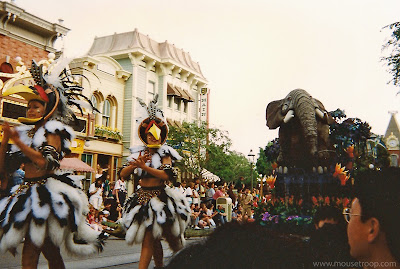 Your experience would differ each time, depending on your choice of seating spot. You were guaranteed to see the entire parade and at least one full "Show Stop. Where you sat along the route determined which "act" you would see in full.
The parade halted as the "King" music concluded, and Mufasa's voice echoed through the park, encouraging Simba to take his place as the new monarch while performers distributed African percussion instruments among the front rows of the crowd. 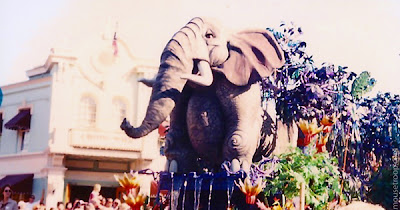 Then the entire production launched into "Circle of Life", with each parade unit becoming the focal point for a dance or acrobatic performance and the selected audience members contributing to the song's beat. As the song concluded, Simba let out a roar, the crowd went wild, the instruments were gathered back up, and the parade continued marching toward its next performance stop as "I Just Can't Wait to be King" started up again
Disneyland shops sold a VHS tape of the production, and several videos recorded by guests can be found on Youtube.
A lot of fans, myself included, would have been happy to see The Lion King Celebration remain a permanent part of Disneyland. To this day, I've never experienced a more spectacular, immersive daytime show at the park. 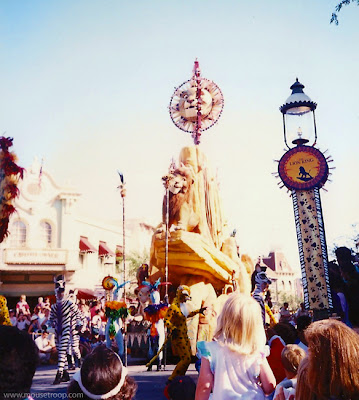 Happily, parts of it traveled to Disney's Animal Kingdom to become set-pieces in the live show, Festival of the Lion King in 1998. It's good to know part of the parade lives on.