Dole Whips in the Tiki Room (with Fish Heads & Crumbs) 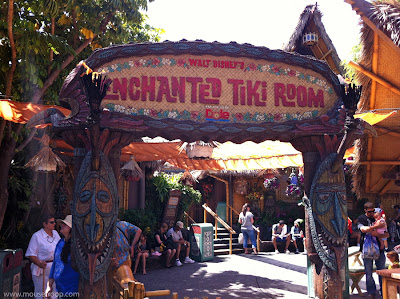 Walt Disney's Enchanted Tiki Room delights children and adults on both coasts (teenagers tend to flee its awesomely corny jokes and Jose's Bing Crosby tribute, but they'll come around eventually). The Disneyland version has one great bonus feature: the popular Dole Whip frozen treat is for sale in the pre-show area (along with other Dole pineapple selections) and you are encouraged to bring your snack into the attraction to eat during the show!

Don't worry: the birds won't try to mooch a taste. As for the other inhabitants of this place of joyous songs and wondrous miracles, well...cue today's comic strip...