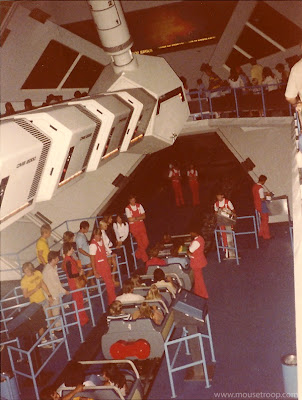 Space Mountain opened at Disneyland on May 27, 1977. I got to the park a few weeks later to take my initial trip into "superspace." I'd heard opinions of the ride from friends who'd gotten there first. One fellow actually swore the tracks were invisible because they were made of transparent fiberglass. Another claimed the ride ended by circling a small planet and then crashing into it.

Remember, there was no interenet. All you had for new-attraction reference were rumors, commercials, and a few paragraphs of PR in the latest issue of Disney News. I'd read everything I could find about Florida's Space Mountain (there sure wasn't much to be found in those days), and I could not wait to finally ride Disney's dark indoor coaster.

I finally arrived on a June afternoon to find a two-hour wait, with the line starting back on Main Street. Star Wars (before it was known as "Episode IV") had also opened that May, so Darth Vader t-shirts were everywhere. We inched forward past Adventure Thru Inner Space and the People Mover entry, up the speed ramp, through the upper-level switchbacks, and into the mountain itself. Immediately, things got more exciting as the air around us echoed with rumbles and distant screams.

The Imagineers wanted to give folks a glimpse of this unique attraction before boarding, so the queue (and the Peoplemover track above) passed a viewing window, where we could watch the "rockets" zipping around in the darkened show building. At one point, the coaster cars roared past just a few yards away. I immediately noted that the track was not made of transparent fiberglass.

I soon got my first look at the loading platform and took the above photo from that spot. Between the awesome design, the spacey sound effects, excited guest chatter and the hissing of the braking system, this was one of the most energetic, wonderful rooms I'd ever seen.

The ride began. Things were a bit different back then. No onboard audio. The first lift hill reminded me of a game show set. The second (main) lift hill was brightly lit, surrounding riders with a clever mirrored illusion of energy cells stretching away into the distance. Emerging into the darkened, whirling starlight realm of "space," the track wrapped around a bright orange geodesic satellite thingy before climbing the final short lift hill to the very top of the ride. You could see the glowing side-panels of the other rocket sleds rushing around as projected asteroids (that really did look like Toll House cookies) zipped across the dome.

I was in the front seat, and I kept trying to ignore one nagging observation: "I can see the tracks." There was no getting around it; between the viewing area, the projections, the glowing rocket cars and the bright open end of the main lift hill, 1977 Space Mountain just wasn't as dark as I'd hoped.

The ride itself, though, was a blast. Zippy and smooth, it didn't feel at all like a convincing space flight, but as an indoor roller coaster it became an instant favorite. I soon discovered that the back seat made the ride twice as exciting with its reduced view of the track ahead and the stomach-flipping effect on that one great drop near the end.

I loved Space Mountain back then, but I greatly prefer the new, improved version that opened in 2005. Today's Space Mountain features better effects, a great on-board soundtrack and--best of all--a darker interior that truly hides the tracks and brings the fantasy space flight to life. Disney took a great ride and made it perfect.