The Pooh Effect: Why Disneyland Needs a New Audioanimatronic Show 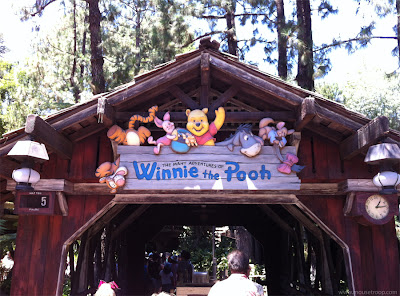 Critter Country's dark ride, The Many Adventures of Winnie the Pooh, features one of Disneyland's best attraction entries. To long-time fans, the structure's also a bit heartbreaking, for this lovely covered bridge once led to the Country Bear Jamboree.

For many Disneyland fans, the decision to gut two technologically miraculous audioanimatronic theaters (Disneyland had two identical Country Bear theaters for double capacity) to build a C-ticket dark ride seemed -- to put it nicely -- short-sighted. And, no, hiding Max, Buff and Melvin in the ride as an Easter egg for fans didn't help things...well, okay, maybe it helped a little.

That's all DL history now, and nothing's going to bring the Country Bears back to Disneyland. Pooh's a cute dark ride with a (usually) very short line and a lovely inherited covered bridge.

Looking forward, however, I hope the powers-that-be at Disneyland address a certain issue: since the Bear's departure, the park completely lacks the magic of a large-scale audioanimatronic stage show. The Bears, Carousel of Progress and the later America Sings used to be a huge part of the Disneyland experience -- a special layer of wonderment that now only exists on a smaller scale in the excellent Enchanted Tiki Room and Great Moments with Mr. Lincoln.

Disneyland Resort could use a big new audioanimatronic show; it's the type of attraction that only Disney can pull off at that level of excellence, and younger west coast fans have never seen one.

And now I'm suddenly looking across the Esplanade toward Cars Land, and picturing how awesome it would be to have a musical automobile review with the Radiator Springs crew performing hits from the 50's and 60's....I'd be first in line.