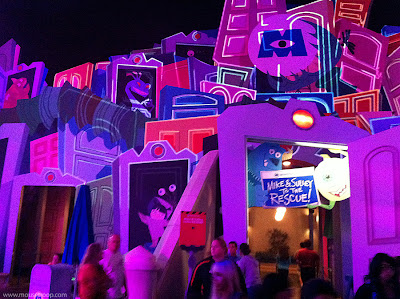 Monsters Inc. Mike & Sulley to the Rescue is an odd duck of a ride, but a fun experience. Its arrival at Disney California Adventure transformed the site of a short-lived, terrible, embarrassing opening day attraction (Superstar Limo) into a likable retelling of the Pixar film, Monster's, Inc.

As much a patch-job as an original attraction, the Monsters, Inc. dark ride inherited Superstar Limo's vehicles, track layout and flat cutout-style entry facade. Although the stylized front succeeds in helping guests find the ride in its tucked-back corner of DCA's Hollywood Land, I'm not a fan of the "temporary" vibe it creates. If future plans for this area of the park include keeping Monsters, Inc., I hope the Imagineers come up with a different approach for the exterior.

The logical transformation of the old limousines into Monstropolis taxi cabs resulted in a unique quirk for the resort: DCA and Disneyland each now have their own taxi-themed dark ride. Unlike Roger Rabbit's spinning, crazy whirl through a blacklight Toontown noir, however, the Monsters, Inc. dark ride is a slower, gentler journey through a fairly straightfoward narrative, following blue collar monsters Mike and Sulley as they try to return human toddler Boo to her bedroom closet's door. The on-ride "dangers" are very mild, and the film's scariest-looking character, Mr. Waternoose, isn't included at all.

As far as I know, it's also the only Disney dark ride that takes you through a factory restroom, resulting in a true "What the..." moment.

My only real complaint about the ride is the fact that it's very dialogue-heavy -- and most of the characters' mouths don't move. Combined with the slow pace of the ride vehicles, this creates many instances where you're watching immobile figures delivering full lines of dialogue -- it sometimes feels like a furry wax museum. Still, it's all 100% better than the awful ride it replaced.

The adventure improves greatly in its finale, first with a kinetic and wonderful recreation of the Door Warehouse, and then an ending encounter with Roz, the one outstanding audioanimatronic in the ride. Be sure to respond when she speaks to you; you'll get an answer!

Monsters, Inc. Mike & Sully to the Rescue isn't my all-time favorite dark ride, but it's a colorful, jolly family adventure that all Disney/Pixar fans should experience at least once.