Ghosts of the Past: The Disney Villains Shop 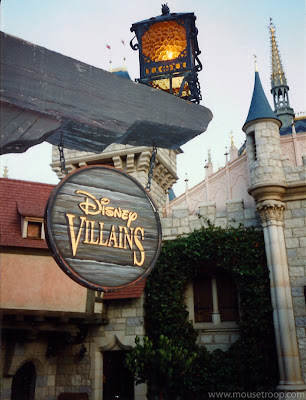 This quaint little shop in Disneyland's castle courtyard has seen many changes over the decades. It's been a magic shop, a Christmas store, and it currently sells swords and family crests. In the early 90's, however, it housed the Disney Villains shop.

One of the most fun stores in the park, The Villains Shop sold a colorful variety of shirts, hats, license plate frames and coffee mugs, all featuring characters such as Maleficent, Chernabog, the Evil Queen, Captain Hook, Ursula, Cruella and the Cheshire Cat.


I had a fun friendly argument with a shop cast member about that last one. I would never classify the Cheshire Cat as a villain. Sure, (as the shopkeeper pointed out) he led Alice to the Queen of Hearts, then -- purely for his own amusement -- framed the girl and nearly got her executed. He'll do that to you on the dark ride, too. Okay, so he's a jerk and a trickster, but...a true villain? Naw. If they're going to call the Cheshire Cat a villain, then they've got to include Tinkerbell on that list (after all, she did tell the Lost Boys to kill Wendy).

Personally, I bought more from the Villains Shop than from any other store that's occupied that location, and I'll bet I'm not the only one. With well-designed merchandise and a strong theme tied to the company's heritage, it remains one of Disneyland's most well-remembered extinct shops.