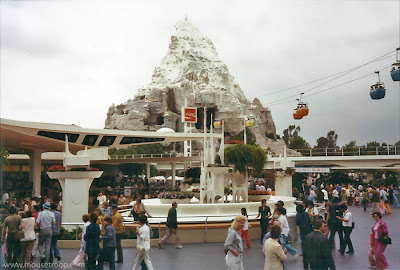 Here we are in 1975. Tomorrowland looks great, even in this crummy weather. My teenage self, on his first independent road trip to the park (with best friend), has camera in hand. Ready for a ride on the Skyway?

One problem: the line on the Tomorrowland side is ridiculously long. Being Disneyland pros, however, we know there's never a long line at the Fantasyland station. So, we'll just dash over to the Chalet and start there. By the way, the above shot captures a great little detail for die-hard Disneyland fans. Can you spot it? I'll reveal it at the end of our ride. 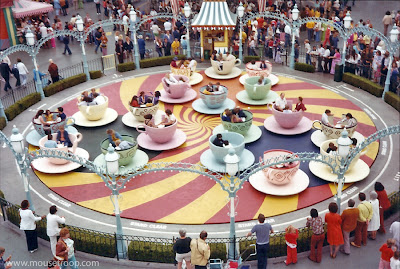 Gliding out from the Fantasyland Skyway station, we see the Mad Tea Party in its original location before it got moved -- lock, stock & saucers -- to a new home by the Alice dark ride in 1983. 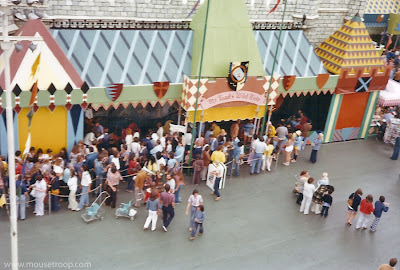 The original Mr. Toad's Wild Ride. Even before the remodel that turned the front into a detailed replica of Toad Hall (and mixed in ideas from the WDW version), this attraction's always drawn a crowd. In pre-home video days, very few guests had ever seen the film Ichabod and Mr. Toad, but the ride stood on its own. Still does! 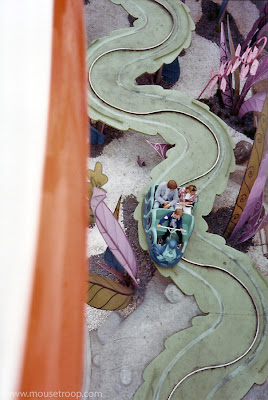 Looking straight down over the side, we see a caterpillar navigating the final downhill turns at the end of Alice in Wonderland. Admittedly, this looks a lot more charming (and less grungy) from ground level. 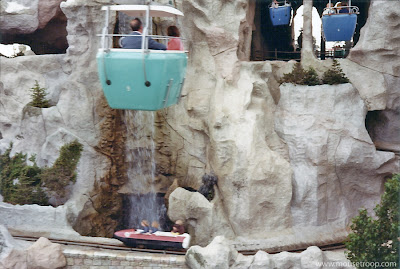 We've just passed through the echoey, rumbly, non-Abominabled original Matterhorn interior, and emerged just in time to see one of the old single bobsleds race over the bridge. 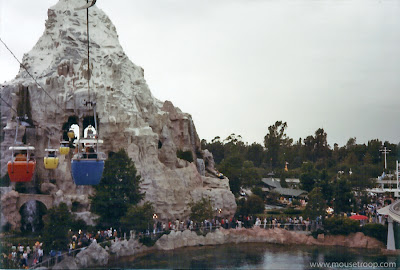 Gliding over the Submarine Lagoon. That line for the Matterhorn has always been there. We can see another bobsled swooping along a curve on the right. 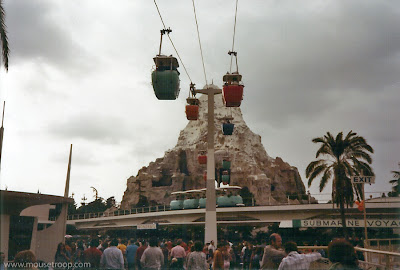 We've arrived safely in Tomorrowland, and I've just bumped my head on the cabin ceiling despite the rider operator's warning one second before. D'oh!

Thanks for joining us on a flight over Disneyland! Hey, look, the Peoplemover! We should take a ride. But, no hurry. I mean, it's always gonna be there, right? Sigh.

Here's that little detail from the first photo: 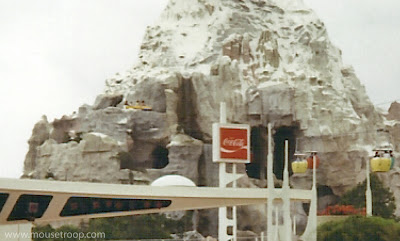 We can see a yellow bobsled in the upper left going around the top turn just after the lift hill. That turn offered an amazing view of the park's hub before that section of the ride was completely enclosed in the big 1978 remodel. Now you reach the top and take that turn in total darkness. It's a scary effect, but I sure miss that view...
Posted by Rich T. at 12:12 AM