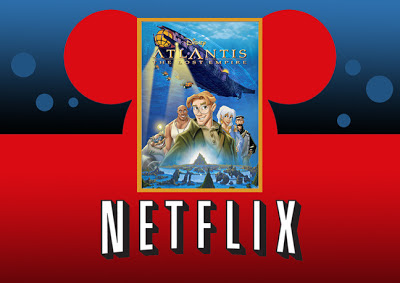 Netflix has just added Atlantis: The Lost Empire to its lineup of Disney films available for digital streaming.

Released in 2001, Atlantis has quite a bit in common with Treasure Planet (also on Netflix): It's a non-musical, straightforward science fiction/fantasy adventure about a fatherless young man on a quest to make a name for himself.

Also, like Treasure Planet, this film is greatly under-appreciated. If you've never seen Atlantis, now's your chance to embark on a terrific adventure that unfolds like an animated spiritual successor to live-action Disney adventures such as 20,000 Leagues Under The Sea and In Search of the Castaways. Its unique blend of Jules Verne-inspired settings and hand drawn animation gives it a unique and very effective style. Highly recommended.
Posted by Rich T. at 12:01 AM