On a complex ride such as Radiator Springs Racers, occasional stalls and shut-downs are inevitable -- particularly during the first year of operation. In the two dozen rides we've taken on Racers, we've experienced two temporary shut-downs. This time it happened in a favorite location, Doc Hudson's garage, where the delay helped us discover something new about the ride... 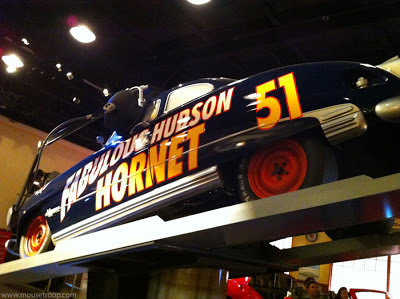 At this point of the adventure, the track has split into two lanes. We've just emerged from Ramone's House of Body Art while our opponents have come out of Luigi's Casa della Tires. We got our gruff pep talk from Doc, moved forward a few feet...and then we came to a halt for the unscheduled "intermission" alongside the town's respected judge/physician/retired racing champ.

Doc Hudson is one of the most amazing audioanimatronics on the ride. Until this moment, I'd never turned to look back from this angle. 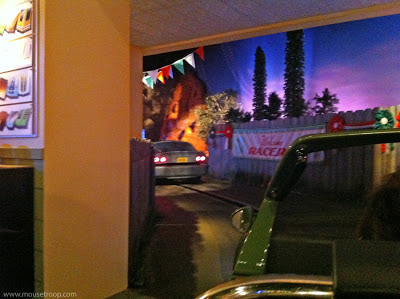 ...the starting line waits just a few yards away! Here, I'd like to point out a wonderful detail of this ride: During these situations, your car continues to make idling and engine-revving sounds as if it's just as impatient to get underway as you are! 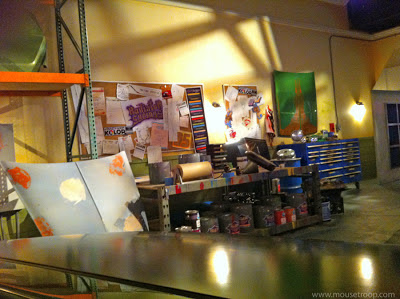 Looking back to the right, I noticed for the first time that the two halves of the garage are themed to whichever shop you've emerged from. We came from Ramone's, so this side is filled with paint samples, stencils and artwork. It's got the rough, hands-on look of someone who likes to create and experiment. 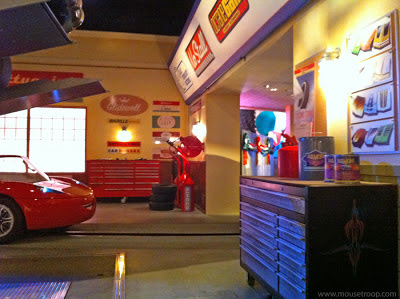 Looking across to the other side, we can see it's themed to Luigi's tire shop and is neat as a pin, in keeping with Luigi's personality.

Of course, usually everyone's eyes are glued to Doc Hudson during this scene. The amazing attention to detail along the sidelines goes mostly unnoticed...consciously. Yet, it's those kind of layered details that make everything seem so convincing and help smooth the transition from the shops to the garage. Doc's garage winds up feeling like a real place with its own history, even though we only experience it for about seven or eight seconds on a normal ride-through. 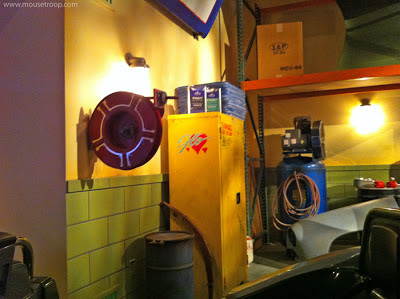 Another look over at the Ramone side, where he's painted his wife's name on a locker. 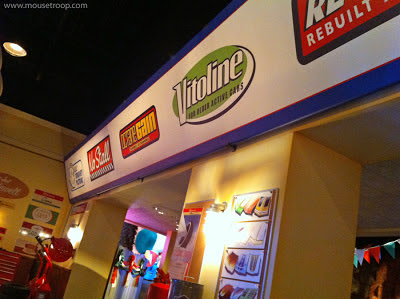 The two themes continue right up to the very center of the garage. Above we see logos for several of the Cars Universe product sponsors (love the "Vitoline -- For Older, Active Cars"). Out the garage exit, we can see some of the festive "Race Day" bunting leading to the starting line. 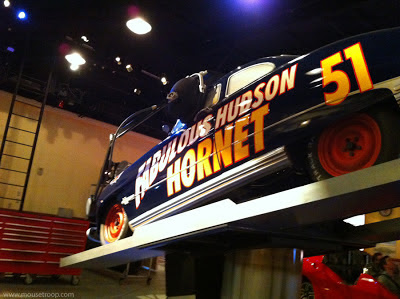 One more look back at Doc. It's not the most flattering angle of the grizzled three-time Piston Cup Champion, but I do love the giant headphones and microphone he's wearing (so he can continue to coach us while we're out on the track).

A few minutes later, the ride resumed and we finally got to race. We lost, which means we didn't get to hear Doc cheer "Hot snot, you won!!!" over the radio, but his encouraging words of consolation were almost as much fun.
Posted by Rich T. at 12:05 AM