The Board of Suspense 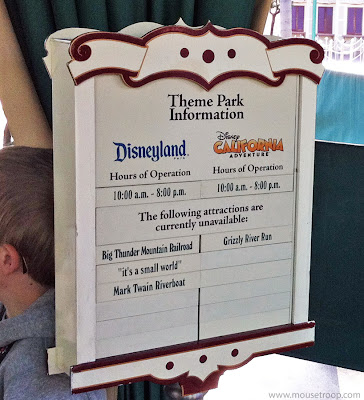 It appears near the entry to every Disney park, and sends cold chills down the spines of Disney fans worldwide.

It's the Closed Attractions Board! Don't you hate that moment when you first spot the sign and--holding your breath--you move closer to see which rides are closed...er, being refurbed....are currently unavailable.  "Currently unavailable" sounds much nicer than, "in pieces" or "temporarily dismantled."

Looking ahead, I have to face the reality that, sooner or later, Radiator Springs Racers is going to have to go down for a routine refurbishment. When that happens, it'll be interesting to see how much the downtime hurts DCA's attendance. Disneyland's got so many great rides that it can easily hold up while a huge E ticket like Big Thunder goes under the knife. DCA's a different story. Having an E Ticket like Grizzly River down hurts the younger park's offerings much more severely. When the time rolls around for Racers' first refurb...ouch.
Posted by Rich T. at 12:01 AM