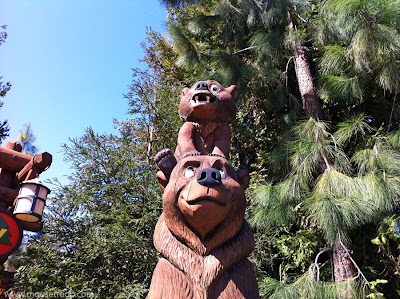 Can you name these two? Kenai and Koda, from the strange, moose-infested Disney animated film Brother Bear, stand watch near the entrance to DCA's Redwood Creek Challenge Trail. The outdoor play/adventure zone, full of rope bridges and rock climbs, has shifted its focus to Dug and Russell from Up, but this life-size statue still stands as a silent tribute to Disney's moderately successful and somewhat forgotten animated tale of the hunter who gets turned into a bear.

With the release of Pixar's Brave (I film I love), the Walt Disney Company made history by becoming the only studio on Earth to have released two animated films -- within a decade of each other -- about a human turning into a bear. Thankfully, both movies turned out pretty great.
Posted by Rich T. at 12:17 AM