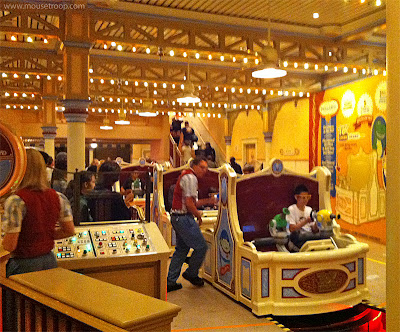 The lively atmosphere of this loading station sets the mood for a terrific ride; Toy Story Midway Mania provides one of the most intensely entertaining sensory-overload experiences in all of Disneyland Resort.

It's also one of the trickiest rides to board without a hefty wait in line. Unlike its sister attraction in Florida, the DCA Toy Story ride has no Fastpass option. The good news: without Fastpass, the line moves fairly quickly, and an average afternoon wait hovers around the 45 minute mark. 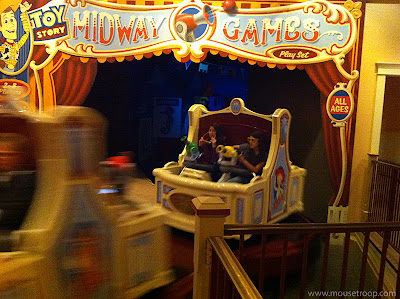 The bad news: that  line remains consistent throughout most of the day. The only way to board quickly is to hurry over to Toy Story first thing in the morning (while everyone else is in Cars Land).

Visit Midway Mania during a performance of World of Color. As described in a previous post, most of Paradise Pier goes dark for the water show, but Toy Story remains open. Since my family and I can't pass up Radiator Springs Racers as the First Ride of the Day, we find Plan B a fine alternative. 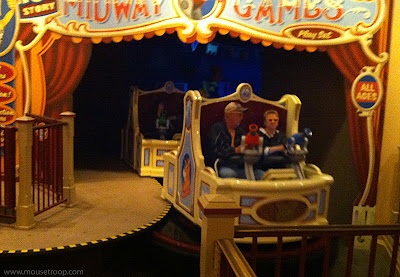 Back when Toy Story Midway Mania was under construction, I was curious but wary; the carnival game theme and use of film in place of on-ride audioanimatronics  didn't sound like my idea of a great attraction. To (geek alert) quote Thorin from The Hobbit, "I've never been so wrong in my entire life." I will never forget my first ride on Toy Story Midway Mania; I climbed out at the end feeling euphoric from one of the most incredibly fun park experiences I'd ever had.

To this day, there is nothing like Toy Story Midway Mania. Everything about it -- vehicle motion, music, the 3D, the live effects, game design, pacing -- all adds up to one of the giddiest, funniest and most surpising rides of all time. My mind boggles at the thought of the computer processing power going on in this creation that allows all of that high-definition 3D to be created in real-time for four players simultaneously on each midway game screen.

As a closing note, I should probably add that I adore this ride even though my aiming skills leave a lot to be desired. If Disney actually awarded plush prizes at the end (instead of cartoon "virtual" prizes), I'd have a closet full of rabbits and beavers.
Posted by Rich T. at 12:05 AM