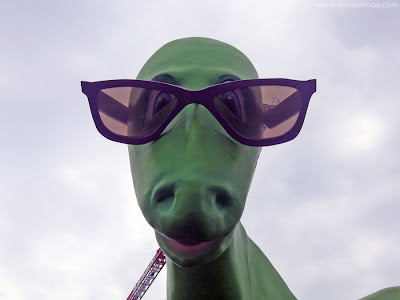 The doomed Apatosaurus of Dinosaur Jack's Sunglass Shack peers down at us in a shot from 2008. The ominous sky and the background construction crane are a coincidence; Dinosaur Jack would survive one more year of operation before getting demolished.

A sunglass shop shaped like a prehistoric beast, Dinosaur Jack's was designed as a tribute to some of the wacky roadside architecture of California's past. Long before the much better Route 66 appeared in Cars Land, Paradise Pier had it's own micro Route 66 area -- a version few noticed or admired.

I'm wondering if that giant pair of shades still exists somewhere...
Posted by Rich T. at 12:01 AM