The Five Best Moments in Adventureland 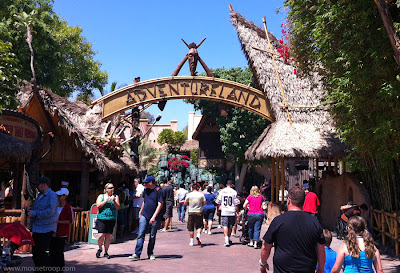 Just a few paces from Main Street U.S.A, you can find yourself suddenly surrounded by unfamiliar gods, skulls on posts and snakes in barrels. Welcome to Adventureland, home of a fearless archeologist, a man raised by gorillas, an infamous jungle tour company, and one very enchanted roomful of tikis.

If you count the Jungle and all of the Indiana Jones attraction, Adventureland is enormous -- but you'd never guess from the one small, crowded avenue that handles all the foot traffic.

It'd be easy to make a short list of the best attractions in Adventureland, but I'd like to focus on the best moments the land has to offer. Here's a quick list of my five favorite Adventureland moments, starting with #5:
5) The Jungle Cruise piranha attack. I love the whole Jungle Cruise, but the piranha attack near the end is very clever and actually makes people scream...in a good way.

4) The Enchanted Tiki Room's pre-show. Mainly because you get to hear Thurl Ravenscroft boom out the lines, "I AM TANGAROA!!!....HERE IN THIS LAND OF ENCHANTMENT, I APPEAR BEFORE YOU AS A MIGHTY TREE!!! STAAAAND BACK!!!" And when Tangaroa tells you to stand back, you better darn tootin' stand back.

3) The Indiana Jones Adventure's skull cavern. I'm crazy about the entire experience (including the queue) but the very best part of the ride (and I think many folks will agree with me) is that stretch between the giant cobra and the rat caves. Between the downhill slope into the skull cavern, the wild motion of the vehicle, and the great John Williams chase music, this part of the ride truly make you feel like you're a main character in an Indiana Jones movie. The giant rolling boulder is nearly as good.

2) The Enchanted Tiki Room finale -- the part where everything in the room comes to life and the gods get angry. Even though this is the world's first full-fledged audioanimatronic show, this finale still ranks as one of the most magical and terrific moments Imagineering has ever created. 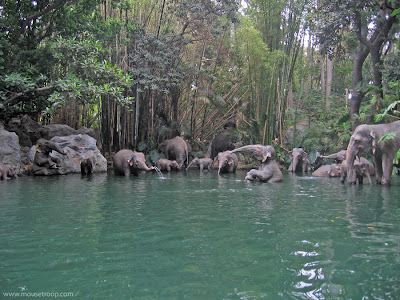 1) Entering the Jungle Cruise Elephant Pool. I wrote about this scene in an earlier post, and it remains my favorite part of the ride. No matter how many times I see it, it still enchants me every single time. There's nothing high-tech going on here -- just brilliant design and a perfect combination of sculpted fantasy and genuine jungle foliage.

Those are my picks, based purely on which moments make me smile the most. I'm sure everyone has their own particular favorites. What are yours?

NOTE: DUE TO PLAYFUL SPIRITS AND WORK SCHEDULES, OUR WEEKLY FISH HEADS & CRUMBS COMIC STRIP WILL BE APPEARING ON WEDNESDAYS FOR A BIT, STARTING THIS WEEK. THANKS!
Posted by Rich T. at 12:24 AM