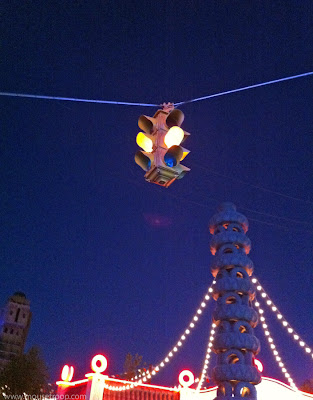 Cars Land may be mobbed with odd creatures called "humans," these days, but Radiator Springs remains true to its roots as a one-traffic-light town. The light hangs right where it belongs, at the intersection of Route 66 and Cross Street, leisurely blinking its yellow caution signal.

It's also a detection device for revealing the true fans in the crowd. They're the ones, when seeing Cars Land for the first time, who notice the signal and stop in their tracks to count the blinks. And then they smile, for just as hippy van Filmore observes in Cars, "every third blink is slower."

It's such a small detail, but one that simply could not be left out. Without that extra hold on the third blink, it would just be an ordinary traffic signal. With the quirk, it becomes a modest little beacon letting you know that, yes, you really have arrived in Radiator Springs.
Posted by Rich T. at 12:01 AM