Park Music on iTunes! A Review of The Circle Sessions 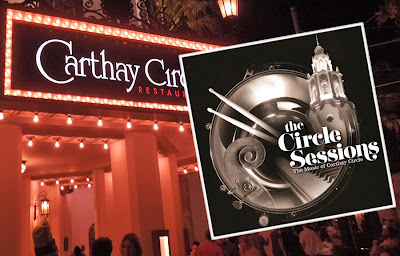 Happy New Year! If you're looking for some mellow music to unwind with after all last night's festivities, you're in luck; Disney has actually released an album of park music for digital download on iTunes and Amazon.

The Circle Sessions: The Music of Carthay Circle has been available at Disney California Adventure since early November, but just hit iTunes and Amazon a week before Christmas.

Comprised of twelve tracks from Buena Vista Street's Carthay Circle Restaurant, this album glides through smooth jazz interpretations of classic Disney tunes old and new, including "A Dream Is a Wish Your Heart Makes", "Ev'rybody Wants to Be a Cat", "Alice in Wonderland" "Be Our Guest" and "Married Life" from Up.

It's a Disney fan's perfect relaxation album, whether as a micro vacation in your headphones or for adding a touch of DCA to dinner at home. The musical style is comparable to Vince Guaraldi's classic compositions for A Charlie Brown Christmas and The Great Pumpkin; the band here achieves a very similar tone and light-on-its-feet arrangement. It's improvisational without straying too far from the source melody.

The album flows smoothly from beginning to end, and never ceases to entertain with its fun, lively and imaginative twists on familiar tunes.

At $7.99 for twelve tracks, the price is certainly reasonable. If the album sells well online, maybe we'll see more park music released in this format. And, yes, I checked, but The Music of Cars Land did not join its sibling DCA album in the electronic marketplace.

That brings the total number of Disney Park albums on iTunes up to (drum roll)...three. Oh well, at least the other two (Country Bear Jamboree and Finding Nemo: The Musical) finally have some company.

Imagine a 2013 where Disney decides to get serious about releasing large quantities of park music to iTunes. A Musical History of Disneyland? Fantasmic? Animal Kingdom? Past Classics of Epcot? Yes, please.
Posted by Rich T. at 12:23 AM